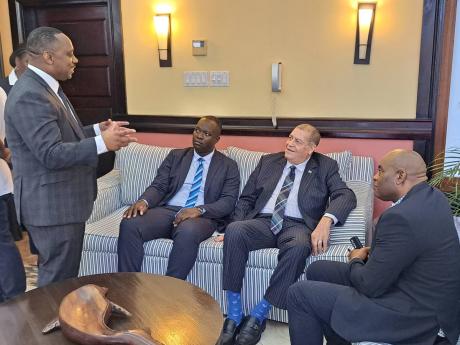 JAMAICA’S TRANSPORTATION sector received an upgrade following last Thursday’s launch of the new DoGetGo app, which will allow users ease in securing transport services in western Jamaica and, over time, potentially across the rest of the country.

The app, which was created by technology developer Rydeum Caribbean and launched in partnership with the Jamaica Union of Travellers Association (JUTA) Montego Bay, had its first phase officially unveiled at the Half Moon Resort in Rose Hall, St James.

Mark Hannah, the founder of Rydeum Caribbean, expressed gratitude for the chance to reap the results to be gained from DoGetGo, a project he started in 2017 in response to an identified need for transportation arrangements to various locations.

“I am excited because it is not every day you see your dream come true. When I began this idea and embarked on this journey, I found obstacles, but most times when God gives you a dream of a vision, He makes sure it is bigger than you,” said Hannah.

“Everyone is here for a reason and they do not even know why, but there are millions of pieces required to provide the power for a launch. Everybody in this room has something to contribute to this vision, and everybody has to give what they have,” Hannah added.

While DoGetGo’s first phase is at present focusing on using the app to arrange transportation to various locations across the island, other aspects of the app which are to come will include meal and grocery delivery, sending and receiving of monetary payments, booking of tours, and making medical appointments.

The app’s launch marks the latest phase of the collaborative effort between Rydeum Caribbean and JUTA, as plans for the app’s integration and distribution between the two entities had started from as far back as July 2021.

Transport and Mining Minister, Audley Shaw, said the DoGetGo app comes at a time when commuters are demanding greater efficiency in the local transportation sector.

“We are in a time of great uncertainty with even greater challenges, and the way we do business and interact with customers has changed and will have to change. Transport affects every one of us at every stage, and it is also one of the main drivers of economic growth,” Shaw said at the launch.

“As Minister of Transport, I support the introduction of innovative technologies to drive the transport sector. The app comes at a time when commuters demand timeliness and flexibility in the sector,” Shaw added.

“I am pleased to say now that today is the day that we can safely say that DoGetGo, Rydeum, and JUTA Montego Bay have revolutionised the entire transportation sector in Montego Bay. We exist to give people freedom through equitable distribution of power, creating a better quality of life for everyone,” said Lawrence.