How back pains birthed a booming business 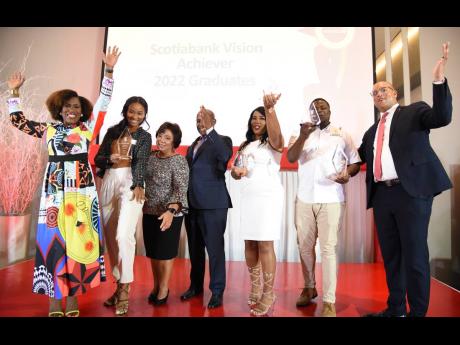 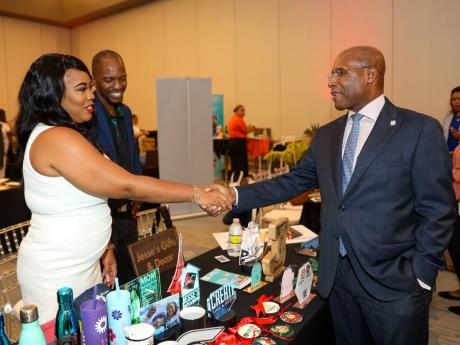 When the time came for the announcement of the final of the top three entrepreneurs in the Scotiabank Vision Achiever Programme for 2022, Jerome Cowans took out his smartphone, walked down the aisle, and started recording the historical moment. He...

When the time came for the announcement of the final of the top three entrepreneurs in the Scotiabank Vision Achiever Programme for 2022, Jerome Cowans took out his smartphone, walked down the aisle, and started recording the historical moment.

He knew his wife, Kiddist Cowans, who started their business Jesse’s Gifts & Décor with only J$8,000 four years ago, had to be declared the ultimate winner.

Additionally, her name was on the programme to give the vote of thanks, so he viewed that as a hint of favour at AC Marriott last Tuesday.

Jerome told The Gleaner that he was extremely proud of his wife, especially because her business idea was birthed while she lay in pain during a difficult pregnancy four years ago.

After becoming pregnant, and while working for Digicel Jamaica, Kiddist was ordered to bed rest by her medical practitioner, a directive she obeyed.

While at home, she wanted to make a cushion for her back and asked Jerome for J$8,000.

“I was having back pains, so I asked him to take me to the store to buy the materials to make the cushion. I made the cushion at the end of the day, posted it on my social media, and the rest is history,” Kiddist told The Gleaner.

The business was then registered with the name of their son, Jesse.

“It all started with one pillow and $8,000 … [and] four years later, we have grown from strength to strength, hired people, become fully tax compliant, registered multiple business accounts, having contracts. It has been amazing,” Jerome said, beaming.

Jerome said that he saw the potential in the business from the get-go and he kept pumping capital into it.

“Being a small-business owner is a challenge, and you know with challenges, it makes us grow as a couple, and to be honest, the profits are good. We’ve seen how our lives have been made better by the returns on investment,” he said.

Jerome told The Gleaner that gains from the business go beyond profit for him as he learnt the skill of sewing and tapping into creative realms he never knew he had.

Kiddist was awarded one of the top three participants in the Scotiabank Vision Achiever Programme, which took place over the last 17 weeks. The other top two participants were Somers Furnishing and HomeMaid Jamaica.

Kaysia Johnson-Vaughn, senior manager of small and medium enterprise (SME) professional partnerships at Scotiabank, said Jesse’s Gifts & Décor was chosen as one of the three winners because the company achieved 41 per cent growth in revenue over the same period last year.

They also implemented strategies learnt from the course to influence changes in the pricing of products; focused on products with larger profit margins; used cash-flow templates to assist with tracking and managing the company’s expenses; acquired new accounting software, which has helped to monitor and evaluate the company’s income and expenditure; and produced reports and better understood their numbers.

Jesse’s Gifts & Decor also implemented a process sheet, which outlined the steps staff members should follow when processing orders; established a system to track efficiency and productivity; and implemented a system to monitor staff deliverables and hold staff accountable.

Jerome told The Gleaner that his wife spoke about winning from the start of the programme.

“At the very first interview, she said she was going to be the winner, and I have sat and saw how hard she worked. She put it on her vision board to say she is going to be the number one, and here she is today,” he said, before boasting with a smile that his support made her successful as well.

Kiddist, who is now a Jamaica House Fellow and working at the Office of the Prime Minister, said she is happy she was able to prove herself worthy of one of the three top spots in the Scotiabank Vision Achiever Programme for 2022.

“Scotiabank has not only championed the spirit of entrepreneurship through talk, but in action. After 17 weeks of learning and implementing the knowledge gained, I can testify that none of us here would have left the programme the same way we came. We are fully equipped to be focused rich, leverage rich, cash rich, marketing rich, sales rich, systems rich, teams rich, and real rich,” she said.

Her involvement in the fellowship ends in December, and she intends to go full-fledge into entrepreneurship at the start of 2023.

This year marks the 12th renewal of Scotiabank’s investment in the empowerment, growth, and development of Jamaican SMEs through the programme, enabling them to thrive and take advantage of the evolving global marketplace.

Scotiabank has been specifically supporting SMEs since 2011 through capacity-building programmes such as the Scotiabank Vision Achiever. The bank continues its commitment to help the sector, which it recognises as a critical catalyst in creating employment and achieving national wealth.