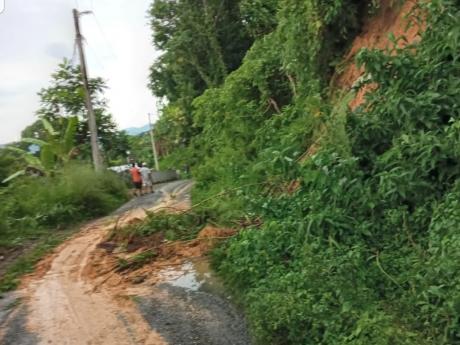 Rain associated with Hurricane Ian has not spared western Jamaica in its destructive effects, as the National Works Agency (NWA) has reported land slippages in sections of Trelawny and Westmoreland.

Janel Ricketts, the Community Relations Officer for the NWA's western regional office, told The Gleaner that a roadway in Trelawny and at least six communities in Westmoreland were affected as a result of slippages from Monday's rainfall.

“In terms of damage that we have so far, we have in Trelawny land slips along the Wire Fence to Warsop route. In Westmoreland, we also have some land slips along the routes from Hopeton to Auchindown, Torrington to Pennycooke, and Ferris to Maxfield,” said Ricketts, adding that some of those roads have been reduced to single-lane traffic.

Hanover was also affected, as the Cash Hill to Dundee and Cascade to Jericho main roads were impacted by land slippages.

However, there were no reports of land slippages or flooding in St James.

Ricketts indicated that the NWA is currently waiting until the rain subsides before determining what action to take in rectifying the land slippage issues.

She also told The Gleaner that remedial drain cleaning work in sections of St James and Westmoreland had already started on the weekend prior to the rains.