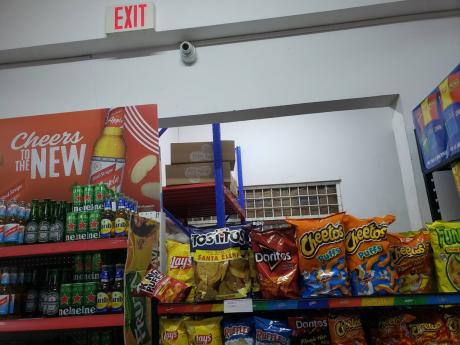 Leon Jackson
The blocked exit at a supermarket on Market Street in Falmouth.

THE TRELAWNY Municipality, with assistance from fire and public health officials, has increased its efforts at public safety and are now on a drive throughout the town of Falmouth to identify breaches by businesses, and have them rectified.

“We have observed several breaches. There are some buildings being built contrary to the plans submitted. A very popular one is the operation of the establishment without adherence to the International Fire Safety Act,” Gager outlined.

The Act states that “all businesses which serve the public must have separate entrances and clearly marked exists. No person must walk more than 75 feet to find a water hose in case of a fire”.

Gager and his team observed that in some establishments, especially in supermarkets, there is some adherence to the code because the exits are marked.

However, he noted that there are cases in which glaring breaches exist.

“The exits are sometimes marked with a sign, but operate as a storage area for goods and garbage,” Gager noted.

As a consequence, the mayor disclosed that the municipality will do what is necessary to have the regulations adhered to, as he informed that operators were warned of the breaches and given time to make the corrective steps, or face court action.

“We took one operator to court recently and won the case,” Gager shared. “We hold no grudges and once regulations are followed that operator will be able to resume business.”

One fire officer, while choosing not to be named, explained that the business owners are required to fulfil certain requirements when filing an application to have their premises passed, but make alterations after they have acquired a licence.

“These operators adhere to the requirements when they are inspected,” the fire department officer explained. “Once they are certified they do their own thing and block up the exits.”

Given the situation, the officer has issued a call for members of the public to assist the fire department.

“If breaches are observed members of the public can take pictures and lodge a report,” the officer said. “This will be highly appreciated because we do not have enough staff.”