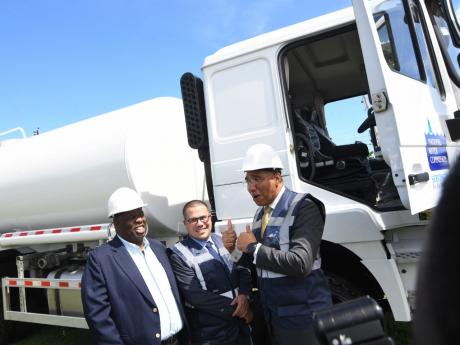 Prime Minister Andrew Holness (right) chats with Michael Shaw, (left) Chairman of the National Water Commission and Matthew Samuda, Minister without Portfolio in the Ministry of Economic Growth and Job Creation, at the handing over of eight water trucks to the NWC on September 27, 2022. - Rudolph Brown photo

Prime Minister Andrew Holness has stated that his administration will be pushing back against the “tide of negativism” from critics who give the impression that Jamaica is on the brink of ruin.

Speaking at the handing over ceremony of eight 5,000-gallon water trucks on Tuesday at the National Water Commission's (NWC) Marescaux Road office in St Andrew, Holness said that he has directed the Ministry of Economic Growth and Job Creation, which he heads, to publicise all its activities.

“We must counter the tide of negativism that is being deliberately spun and fed to the public to craft an outlook and a narrative of doom and gloom,” said Holness.

Holness said that it has become routine in the last four years for a weather system to affect Jamaica and each time the Government has responded.

“What has happened? Has the Jamaican State failed to respond? No. Did the economy shut down? No… There is a strong effort by this Government in building resilience in our economy,” the prime minister said.

He said that the Government has shown the capacity to respond to external shocks and recover quickly and get on with the business of running the country.

He argued that this has been evident with many external factors, including the COVID-19 pandemic, oil price shock, the cost of food, and severe weather.

“This Government gets up back very quickly and keeps the economy going,” said Holness.

Some $105 million was spent procuring the eight trucks handed over Tuesday.

The trucks, bought from Tank-Weld, is the first such purchase since 2010.