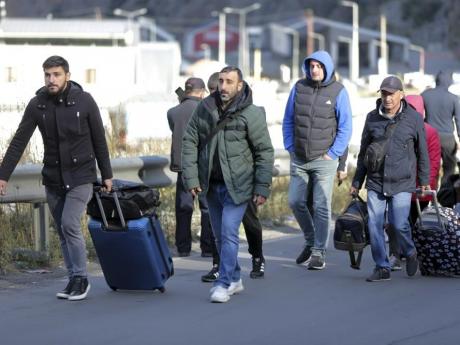 Russians lineup after crossing the border at Verkhny Lars between Georgia and Russia in Georgia, Tuesday, Sept. 27, 2022. Long lines of vehicles have formed at a border crossing between Russia's North Ossetia region and Georgia after Moscow announced a partial military mobilization. (AP Photo/Zurab Tsertsvadze)

KYIV, Ukraine (AP) — The Kremlin paved the way Tuesday to annex part of Ukraine and escalate the war by claiming that residents of a large swath overwhelmingly supported joining with Russia in stage-managed referendums that the US and its Western allies have dismissed as illegitimate.

According to Russia-installed election officials, 93 per cent of the ballots cast in the Zaporizhzhia region supported annexation, as did 87 per cent in the Kherson region, 98 per cent in the Luhansk region and 99 per cent in Donetsk.

In a remark that appeared to rule out negotiations, Ukrainian President Volodymr Zelenskyy told the UN Security Council by video from Kyiv that Russia's attempts to annex Ukrainian territory will mean “there is nothing to talk about with this president of Russia.”

The preordained outcome sets the stage for a dangerous new phase in Russia's seven-month war, with the Kremlin threatening to throw more troops into the battle and potentially use nuclear weapons.

The referendums began September 23, often with armed officials going door-to-door collecting votes. The ballots asked residents whether they wanted the areas to be incorporated into Russia.

Russian President Vladimir Putin is expected to address Russia's parliament about the referendums on Friday, and Valentina Matviyenko, who chairs the body's upper house, said lawmakers could consider annexation legislation on October 4.

Meanwhile, Russia ramped up warnings that it could deploy nuclear weapons to defend its territory, including newly acquired lands, and continued mobilising more than a quarter-million more troops to deploy to a front line of more than 1,000 kms (more than 620 miles).

After the balloting, “the situation will radically change from the legal viewpoint, from the point of view of international law, with all the corresponding consequences for protection of those areas and ensuring their security,” Kremlin spokesman Dmitry Peskov said Tuesday.

Many Western leaders have called the referendum a sham, and the UN Security Council was scheduled to meet later Tuesday in New York to discuss a resolution that says the voting results will never be accepted and that the four regions remain part of Ukraine.

Russia is certain to veto the resolution.