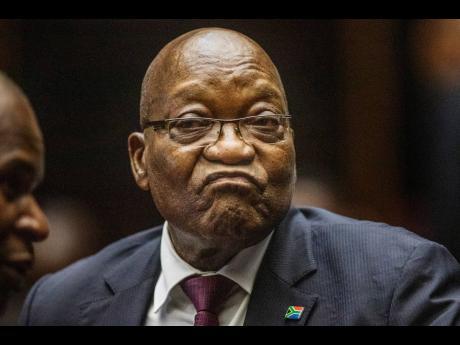 JOHANNESBURG (AP) — Beleaguered former South African President Jacob Zuma says he is ready to make a surprise return to politics by standing for a top position at the ruling African National Congress’ elective conference in December — if he is nominated by party members.

The 80-year-old Zuma was president from 2009 to 2018 before he was forced to resign amid wide-ranging allegations of corruption in government and state-owned institutions.

He was sentenced to 15 months in prison last year for defying a court order to testify at a judicial commission investigating corruption during his tenure, and has since been released on medical parole. Zuma is also facing trial for corruption in a separate case involving a major arms deal the South African government was negotiating more than 20 years ago, around the time Zuma was a deputy president of South Africa.

In a statement released late Monday, Zuma said he had been approached by some ANC members to consider contesting for the position of party chairman at the end of the year.

“I have indicated that I will be guided by the branches of the ANC and that I will not refuse such a call (to contest for the chairman position) should they deem it necessary for me to serve the organization again at that level or any other,” Zuma said.

The party meeting at the end of the year will be crucial to the future of current President Cyril Ramaphosa, who is facing stiff opposition to be re-elected ANC leader and stay on as the country’s president.

Zuma has been critical of his successor and the pair are seen to be part of opposing factions within a divided ANC.

Zuma also endorsed his ex-wife, current government minister Nkosazana Dlamini-Zuma, to contest for the position of president of the ANC against Ramaphosa. Ramaphosa’s position has been weakened by his struggle to get a grip on corruption, a scandal of his own involving a large amount of cash stolen from his ranch, and an ongoing electricity crisis that has recently left Africa’s most developed economy in power blackouts for up to 10 hours a day.

Zuma is still popular among some factions of the ANC and at grassroots levels in some regions, but it’s unclear how he would deal with an ANC rule that anyone facing criminal charges may not stand for leadership positions. The rule also demands that those occupying leadership positions should “step aside” from their positions if they are charged.

The corruption charges Zuma faces are linked to a 1999 arms deal, and the case covers a time when he was a political figure on the rise and then deputy president. He is accused of receiving bribes from French arms manufacturer Thales to provide political protection for the multi-billion dollar deal. Zuma has denied the charges and has moved to have the prosecutor taken off the case, claiming he is biased.