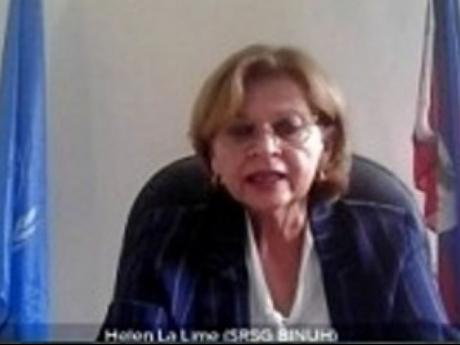 UNITED NATIONS, CMC – The Special Representative of the UN Secretary General in Haiti, Helen La Lime, has called on the United Nations Security Council to act urgently to support the French-speaking CARICOM country, as the gang, economic, and fuel supply crises there “intersect in altogether new and frightening ways”.

Her call comes even as political stakeholders are still struggling to find common ground and define a path to elections.

Speaking from the capital, Port-au-Prince, La Lime said a Haitian-led political solution is the first necessary step to addressing the current crisis.

“To support Haitians in their effort towards a better future, this Council must take urgent action.”

La Lime said that over the past several weeks, three crises have begun to intersect in altogether new and frightening ways in Haiti.

“A gang crisis continues to violently disrupt daily life, driving more than 20,000 people from their homes. An economic crisis has the country in a stranglehold, with Haitians facing soaring food prices, and fuel often available only on the black market. And as these trials play out, and Haitians exercise their legitimate right to protest, political stakeholders are still struggling to find common ground and define a path to elections.”

La Lime said that throughout this crisis, “I have maintained my good offices efforts with all sectors of Haitian society and encouraged all to engage in a broad, open and constructive dialogue.

“While so-far inconclusive efforts have led to a perceived stalemate, national stakeholders have begun to re-engage with a renewed sense of urgency. In the past weeks, Government representatives, political groups, and civil society organisations launched new consultations on ways to forge a wider consensus on a path towards elections.”

She said it is also encouraging to see private sector leaders starting to come together pledging to meet their respective fiscal and legal responsibilities.