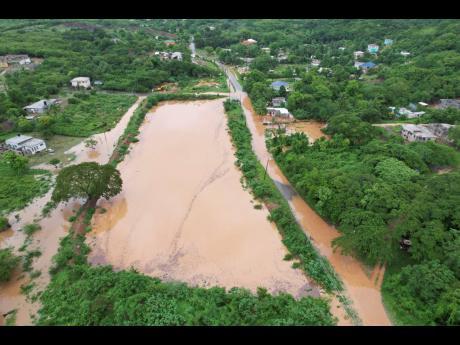 Holness said the cost of permanent repairs is being assessed and an update will be provided in two weeks. Ricardo Makyn photo

Holness provided an update to the House of Representatives, on Wednesday afternoon, on the estimated damage to the island from the outer bands of Ian, which passed south of Jamaica as a tropical storm at the weekend.

He said the cost of permanent repairs is being assessed and an update will be provided in two weeks.

"The costs that I've just outlined here we're not expecting that there will be any significant new budget implications for the repairs. So the NWA (National Works Agency) will have to look into its budget to see how the repairs can be addressed," said Holness.

He said Clarendon and St Catherine were the two parishes most affected by Ian.

The other affected parishes include Kingston and St Andrew, St Elizabeth, Westmoreland, Trelawny and Portland.

Holness said that the NWA is now undertaking a "rapid" assessment to determine the extent of the impact of the rains and additional remediation which will be needed.

He said a preliminary assessment by the agency found that some 47 roads were badly affected by landslides, downed trees or inundation.

However, he said that the majority of roads have been reopened.