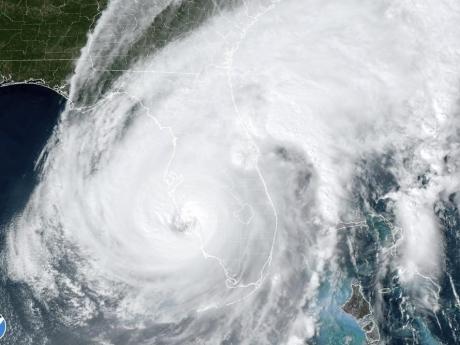 ST PETERSBURG, Fla. (AP) — Hurricane Ian made landfall Wednesday in southwest Florida as one of the most powerful storms ever recorded in the US, swamping streets with water and smashing trees along the coast while moving at a crawl that threatened catastrophic flooding across a wide area.

Barely an hour after the massive storm trudged ashore, a coastal sheriff's office reported that it was already getting a significant number of calls from people trapped in homes. The hurricane's center struck near Cayo Costa, a protected barrier island just west of heavily populated Fort Myers.

Mark Pritchett stepped outside his home in Venice around the time the hurricane came ashore about 35 miles (56 kilometres) to the south. He called it “terrifying.”

“I literally couldn't stand against the wind,” Pritchett wrote in a text message. “Rain shooting like needles. My street is a river. Limbs and trees down. And the worst is yet to come.”

The Category 4 storm slammed the coast with 150 mph (241 kph) winds and pushed a wall of storm surge accumulated during its slow march over the Gulf of Mexico. More than 1 million Florida homes and businesses were without electricity. The storm previously tore into Cuba, killing two people and bringing down the country's electrical grid.

About 2.5 million people were ordered to evacuate southwest Florida before Ian hit, but by law no one could be forced to flee. Though expected to weaken to a tropical storm as it marched inland at about 9 mph (14 kph), Ian's hurricane force winds were likely to be felt well into central Florida.

“This is going to be a nasty nasty day, two days,” Florida Governor Ron DeSantis said, stressing that people in Ian's path along the coast should rush to the safest possible shelter and stay there.

Jackson Boone left his home near the coast and hunkered down at his law office in Venice with employees and their pets. Boone at one point opened a door to howling wind and rain flying sideways.

“We're seeing tree damage, horizontal rain, very high wind — I think it's a 100-plus sustained outside right now,” Boone said by telephone. “We have a 50-plus-year-old oak tree that has toppled over.”

Ian's wind speed at landfall tied it for the fifth-strongest hurricane to strike the US, along with several other storms.

Among them was Hurricane Charley, which hit almost the same spot on Florida's coast in August 2004, killing 10 people and inflicting $14 billion in damage.

The governors of Georgia, South Carolina and North Carolina all preemptively declared states of emergency. Forecasters predicted Ian will turn toward those states as a tropical storm, likely dumping more flooding rains into the weekend, after crossing Florida.