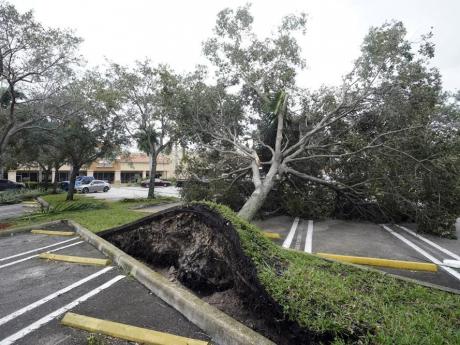 An uprooted tree, toppled by strong winds from the outer bands of Hurricane Ian, rests in a parking lot of a shopping center, Wednesday, Sept. 28, 2022, in Cooper City, Fla. (AP Photo/Wilfredo Lee)

ST PETERSBURG, Fla. (AP) — Hurricane Ian, one of the most powerful storms ever recorded in the US, swamped southwest Florida on Wednesday, turning streets into rivers, knocking out power to 1.8 million people and threatening catastrophic damage further inland.

A coastal sheriff's office reported that it was getting many calls from people trapped in flooded homes.

Desperate people posted to Facebook and other social sites, pleading for rescue for themselves or loved ones. Some video showed debris-covered water sloshing toward homes' eaves.

Mark Pritchett stepped outside his home in Venice around the time the hurricane churned ashore from the Gulf of Mexico, about 35 miles (55 kilometres) to the south. He called it “terrifying.”

“I literally couldn't stand against the wind,” Pritchett wrote in a text message. “Rain shooting like needles. My street is a river. Limbs and trees down. And the worst is yet to come.”

The Category four storm slammed the coast with 150 mph (241 kph) winds and pushed a wall of storm surge accumulated during its slow march over the Gulf.

More than 1.8 million Florida homes and businesses were without electricity, according to PowerOutage.us. Nearly every home and business in three counties was without power.

The storm previously tore into Cuba, killing two people and bringing down the country's electrical grid.

About 2.5 million people were ordered to evacuate southwest Florida before Ian hit, but by law no one could be forced to flee.

News anchors at Fort Myers television station WINK had to abandon their usual desk and continue storm coverage from another location in their newsroom because water was pushing into their building near the Caloosahatchee River.

Though expected to weaken to a tropical storm as it marches inland at about 9 mph (14 kph), Ian's hurricane force winds were likely to be felt well into central Florida.

Hours after landfall, top sustained winds had dropped to 115 mph (185 kph), making it a Category 3 hurricane.

Still, storm surges as high as 6 feet (2 meters) were expected on the opposite side of the state, in northeast Florida.