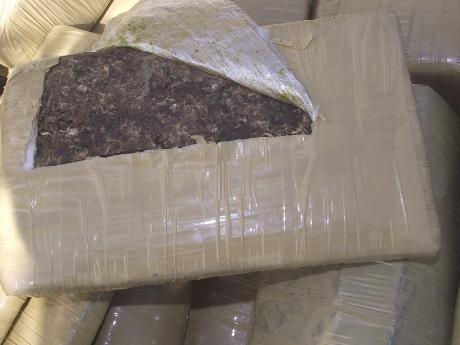 The court heard that a total of 21 knitted bags of compressed vegetable matter resembling ganja were found. - File Photo

Seven persons who were charged in connection with a $100-million ganja bust in Clarendon last week, were remanded when they appeared before the Clarendon Parish Court today.

The seven – six men and one woman – were taken into custody after the police intercepted a convoy of three motor vehicles in Clarendon Park on September 21.

The charges were laid on Monday after the seven were interviewed in the presence of their attorneys.

Among them is Garrie Rogers, 43, a taxi operator of Mountainside district in St Elizabeth, who is charged with possession of, dealing in, trafficking and taking steps to export ganja.

According to the prosecution, when cautioned, Rogers said, "A charter mi get charter fi carry di ganja to St Thomas."

The others facing charges of dealing in and trafficking ganja are:

Courtney Rowe, the attorney representing Gayle, Saunds, Stevens and Watson, made an application for bail, but presiding judge Justice M. Roper said the application was premature.

Roper said the Crown needed more time for verification, including that of addresses, given the fact that the accused live outside the parish.

The court heard that a total of 21 knitted bags of compressed vegetable matter resembling ganja were found in the Toyota Voxy being driven by Rogers. The court also heard that the bags were packed from the floor to the ceiling of the vehicle, and the contents weighed 1,213 pounds.

Rowe argued that investigating officers informed his clients that they were being taken into custody in relation to the small quantities of ganja found in the Toyota Wish for which Saunds and another of the accused declared ownership of the ganja that it was for "personal use".

He added that his clients were taken to the May Pen Police Station where they were granted station bail but, "Whilst waiting to be processed, they were told that they should remain in custody because officers from Clarendon wanted to interview them in relation to what is said to have been found in the Voxy, so it was at that time, for the first time, they were being told about a Voxy (the vehicle said to be have been carrying more than 1,200 pounds of ganja)  being found with vegetable manner."

Rowe said his clients were then taken to the Lionel Town lock-up pending interviews with investigators from the narcotics.

He chided the investigating officer, claiming he had been given a "run-a-round" on the status of his clients.

The court is also awaiting fingerprint, forensic and antecedent reports.

The accused are to reappear in court on October 10.