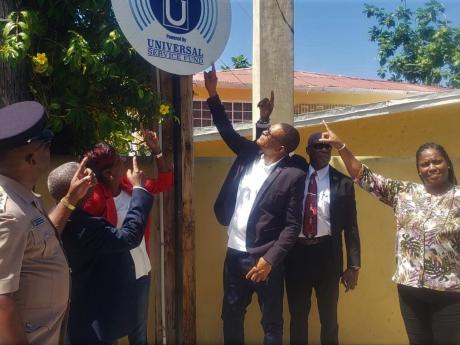 The community of Sandy Bay in Hanover now has free WI-FI service thanks to the Universal Service Fund (USF).

It has been provided as part of the USF's Community Wi-Fi Programme, which aims to increase access to the Internet across Jamaica's 63 constituencies.

The service in Sandy Bay can provide Internet access for up to 500 concurrent users.

Deputy Mayor of Lucea, Councillor Andria Dehaney-Dinham, in her remarks at the commissioning ceremony on September 23, thanked the USF for the facility.

“I know that at a time when Internet access is very important, the USF has found it fitting to ensure that the Sandy Bay community has WI-FI, and so I want to say thank you to USF. I know that the USF's mandate is to ensure that our people, especially the most vulnerable, are connected to the world,” she added.

For his part, Member of Parliament for Hanover Eastern, Dave Brown, underscored the importance of Internet connectivity in the modern world.

“Access to the Internet is important because everything is organised around the Internet – commerce, education, social interaction and even church,” he said.

“Free Wi-Fi gives everyone access to a world of possibilities; therefore, I want to thank the USF for having the initiative in Hanover Eastern that [can] improve the lives of the citizens,” Brown said.

Meanwhile, Director of Projects at the USF, Kwan Wilson, said the Government remains committed to providing access to information to all citizens.

He noted that the USF has also ensured that government agencies in the parish, such as the parish library, police stations, schools and other entities, have Internet connectivity.

Vice Principal of the Sandy Bay Primary School, Perronet Hall-Riley, said that students and staff at the school are “elated” that the Wi-Fi service has been provided.

“Wi-Fi connectivity is a challenge here and there are times that the children are supposed to use their devices and they are unable to do so. because they don't have any connectivity. So, we are very proud to be a part of this initiative that the Government has [put in place] so that the students and teachers will have Wi-Fi connectivity to enable them to get the task done,” Hall-Riley added.