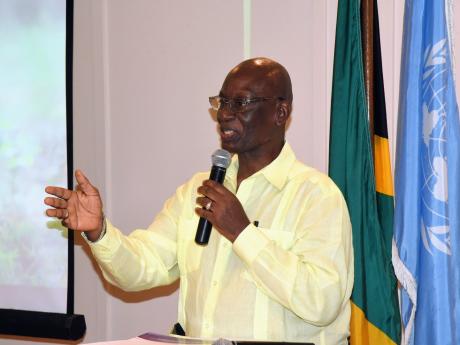 McKenzie noted that several other projects are to take place islandwide. - JIS photo

The expenditure to commence work on restoring the market in Alexandria, St Ann, has been approved, says Minister of Local Government and Rural Development, Desmond McKenzie.

Speaking on Friday, at the launch of a joint programme aimed at strengthening Jamaica's resilience to food and water insecurity, at the ROK Hotel in downtown Kingston, he pointed out that the market is in “very, very high” demand by the small community.

Additionally, McKenzie noted that several other projects are to take place islandwide.

“We're also going to be building a brand-new market in Negril in Westmoreland. Shortly, I'll be breaking ground for the construction of a multipurpose market there. Extensive work will [also] be undertaken on the Savanna-la-Mar market. And when we go into Montego Bay, the Charles Gordon Market is slated to benefit from over $85 million in repairs,” he outlined.

He said, further, that the Highgate Market, which was destroyed by fire earlier this year, will also be rebuilt.

The programme launched is being led by the International Organization for Migration (IOM) and the United Nations Educational Scientific and Cultural Organization (UNESCO), with funding largely by the European Union (EU), through the UN Joint Sustainable Development Goals (SDG) Fund.

Noting that Jamaica, like other nations, has had to deal with the issue of food insecurity, McKenzie said that “it is our markets that will ensure that the food gets to the population. And so, a companion of water and rural development is going to now be supplemented by work on improving and building new markets across the country”.

Moreover, the Cabinet has taken a multi-government approach to markets and a subcommittee has been established to look at a comprehensive market programme.

There are currently 37 markets across Jamaica, 70 per cent of which were built more than 100 years ago.