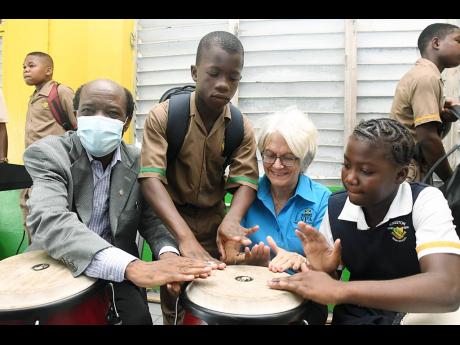 ANDREA WILLIAMS, a student at Kingston High School, is defying gender norms as she seeks to perfect her drumming skills.

The grade-nine student said she decided to join the school’s music club because she developed a liking for the creative arts, specifically drumming, because it is relaxing and brings enjoyment to her.

“I enjoy beating the rhythm and the enjoyment it gives the children,” she said. Andrea is among a small group of girls who have joined the music club at her school. The aspiring soldier shared that she would normally practise beating rhythms at home, but decided to formalise her training by joining the music club, and so far it has been rewarding.

Jermaine Luton, principal of Kingston High School, said more recently the school has revived its music club and decided to include females. He said the music has helped to curb violent incidents.

“The drumming contributes to peace of mind and allows them to relax, and give them a vibe to express themselves,” he said.

“It is difficult for them coming back to school (following the pandemic) and adjusting to the norms. Coming back to a structured environment, it is posing a little difficulty. So yes, we have some disciplinary issues with the students and we are working with them. And I hope that as more students join the music club, we can lessen the number of violent incidents we have in the school,” he explained.

Professor David Akombo, dean of the Faculty of Culture, Creative and Performing Arts at The University of West Indies, Cave Hill campus in Barbados, who was a guest of the Violence Prevention Alliance (VPA) for International Peace Day, which was observed on September 21, also spoke with the students of Kingston High School and Windward Road Primary School.

Akombo underscored the value of drumming, saying it is therapeutic, eases anxiety, promotes relaxation, and reduces levels of burnout.

“When you are frustrated and have anxiety at home, you talk it out. But in addition to that, if you feel like you want to beat someone because you are angry, don’t beat them. If you have a drum, beat your drum,” he advised the students.

The UWI professor also participated in drumming sessions with the students and taught them the art of playing the drum instrument correctly.

Meanwhile, Luton said that Kingston High School is traditionally known for producing renowned musicians and musical talents, such as Marcia Griffiths, and the aim is to return the school to that former prominence.

“What we want to do is go back to the glory days where Kingston High was known as a school which produces musical stars. We want to put music in a way that Kingston High is known for - music and positivity,” he said.

Luton, however, said the school’s music department is lacking in resources.

“Currently, we do not have a proper music room. The room that is there is dilapidated and outdated. We have got some equipment, so we need proper storage of equipment. Any donations of musical equipment would be welcomed,” he said.

International Peace Day was observed this year under the theme ‘End Violence. Build Peace’. The VPA and several of its partners commemorated the day by organising drumming circles in schools, children’s homes, the Bustamante Hospital for Children and in inner-city communities, such as Rose Town.