Accused has never attended any hearing in Home Circuit Court 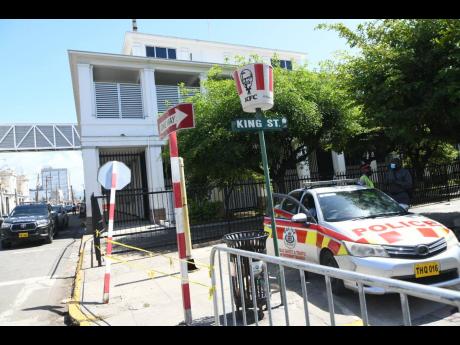 Rudolph Brown
A section of the Supreme Court building in downtown Kingston, where the Home Circuit Court is under way.

THE MOTHER of one of the alleged members of the Clarendon-based Bloods Gang, who broke down in tears on Wednesday in the Home Circuit Court, says she is convinced that her son, who has been missing since last August, is dead.

A prosecutor in the case in which the defendant, 32-year-old Stephen Williams is charged, notified the judge on Wednesday that the man is presumed dead and that he has never attended any of the hearings in the Home Circuit Court.

“He has been missing since August 5,” Williams’ mother told the court, before breaking into tears.

She also told the court that a missing person’s report was filed by his girlfriend, which was confirmed by the detective in the matter.

Williams’ surety, who bailed him when the matter was before the Clarendon Parish Court, further indicated that he last saw him while the case was under way at the court in May Pen.

The presiding judge, however, said that she could not release Williams as the court has to be furnished with proof that he is, in fact, dead. The prosecution and the police were instructed to bring proof to submit to the court.

Following the court hearing, the distraught mother reiterated in an interview with The Gleaner that her son is dead.

“Mi believe say him dead, and people a say him a appear to dem in a dream like him dead,” she said, while noting that she has been struggling to cope with his disappearance.

“Mi cry till mi have headache,”she said, describing her accused son as the best among her seven children.

According to her, it is rumoured that he was killed by his friends.

“To my knowledge, I feel say dem do away with him, ‘cause he is a man weh nuh stay away from him family, and any hardship weh him did fi face wid di law him a face it,” she said.

The grieving mother, who said she had often spoken to her son about the company he was keeping, is appealing to anyone who has information about his disappearance to share it with the police, so that family can get closure.

In the meantime, Williams’ co-accused George Robinson and Abbigail Hydol appeared via Zoom and were remanded, while Travis Hardy and Franklyn Miller did not appear because of technical difficulties. A sixth defendant, Alex Miller, who the court heard was on bail, did not attend court and a bench warrant was issued for his arrest.

A date for plea and case management hearing was scheduled for October 11.

The Bloods Gang, which operated in southern Clarendon, is alleged to have been engaged in extortion and multiple contract killings.

Two alleged members of the gang this year pleaded guilty to several charges, including murder, and were sentenced to life in prison.

Michael Black, 18, who pleaded guilty to two counts of murder, two counts of illegal possession of firearm, and three counts of robbery with aggravation, is to serve 20 years and three months before he is eligible for parole.

The other convict, Travis Gillman, pleaded guilty to a range of serious crimes, including three murders, and was sentenced to a total of 210 years in prison.

However, he will be considered for parole after serving 25 years, as his sentences are to run concurrently.

Gilman’s role in the gang allegedly included hiring gunmen; purchasing guns for them; transporting them to commit murders; and ensuring that the hitmen were paid for their services.