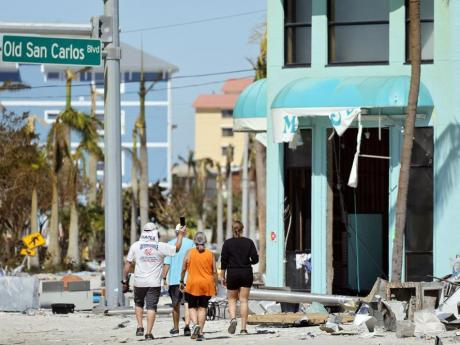 Crews are beginning to repair, and in some cases rebuild, Florida's power grid after the state was pummelled by Hurricane Ian.

Florida Power & Light says it stockpiled enough poles, generators and wire to do the work. But power-industry officials warn that kinks in the nation's supply chain could slow the recovery if Ian causes more damage as it spins up the Atlantic coast, or when another natural disaster strikes somewhere else in the US.

Eric Silagy, CEO of Florida Power & Light, said that Friday evening 850,000 of the utility's customers who lost power in the storm remained without power, but 1.2 million had power restored during the day.

Ian crossed Florida's Gulf Coast on Wednesday as one of the strongest storms to ever hit the US.

Silagy said earlier this week that the company had set aside enough generators in the months before Ian to complete repairs.

Nationally, however, there is a shortage of distribution transformers that take electricity from high-voltage lines and reduce it to levels that can be used in homes and businesses, industry officials said.

“It's a critical component to the electrical grid that has been in scarce supply for a number of months now,” said Joy Ditto, president and CEO of the American Public Power Association. “We started to recognise it as a national concern in late winter, early spring, and the situation is getting worse.”

It used to take about three months for a transformer to show up after being ordered, but now it is taking more than a year, Ditto said. She said that is limiting the ability of companies to stockpile the boxes, and as a result, they are increasingly swapping boxes with utilities facing a shortage.

There are about a half-dozen US manufacturers of the transformers that are dealing with lobar and raw-materials shortages. Ditto said the main choke point is the specialty steel used in transformers — there is only one US manufacturer for that. Her group and the National Rural Electric Cooperative Association asked the Energy Department in May to suspend a 2016 efficiency standard that they say is partly responsible for the steel shortage, but the department has not gone along.

Scott Aaronson, an official at the Edison Electric Institute, which represents for-profit utilities, said the industry is prioritising supplies during hurricane and wildfire season.

“These efforts help to ensure we are ready to share materials with companies impacted by Hurricane Ian if necessary,” he said by email.