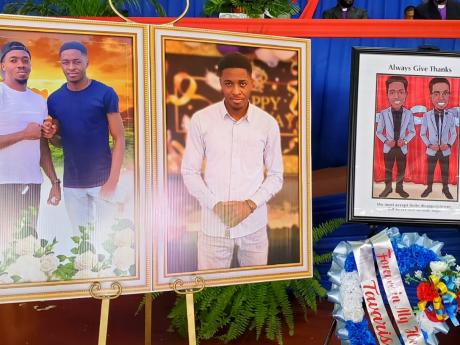 The brothers made headlines on Sunday, August 14 when they jumped from the American Legion Memorial Bridge, more popularly known as the Jaws Bridge, in Martha’s Vineyard, got into difficulties and drowned. - Kenyon Hemans photo.

The New Testament Church of God Convention Centre in Rhodes Pen, Old Harbour, St Catherine was transformed into a sea of sad faces on Saturday for the funeral of brothers Tavaris and Tavaughn Bulgin.

While being a sad occasion, the praise and worship that erupted belied that fact.

Bishop Ruel Robinson set the pace for the proceeding when he told the large throng “this is not a funeral it is a thanksgiving service” as he pointed to Job who lost all his children and chose to worship instead of mourning.

The brothers last month drowned in Martha's Vineyard in the United States.

Stating that there is no understanding what happened, Robinson invited the audience to worship and praise God in the midst of loss and bereavement.

Bishop Orville Plummer, in giving tribute on behalf of the New Testament Church of God Jamaica, described the brothers as “a model of what Jamaican males should be. Godly, civic minded, upstanding young men, jovial, respectful, law abiding, purposeful and destined for greatness.”

The brothers were lauded for their church involvement at Palmers Cross, Clarendon as they played active roles in several ministries such as Sunday School, choir, music, expansion.

The brothers made headlines on Sunday, August 14 when they jumped from the American Legion Memorial Bridge, more popularly known as the Jaws Bridge, in Martha's Vineyard, got into difficulties and drowned.

The brothers will be interred at Deeside, Trelawny following a second thanksgiving service on Tuesday, October 4 at the Hastings Baptist Church in Deeside.