Jamaica Nurses Group of NY lauded for 60 years of service 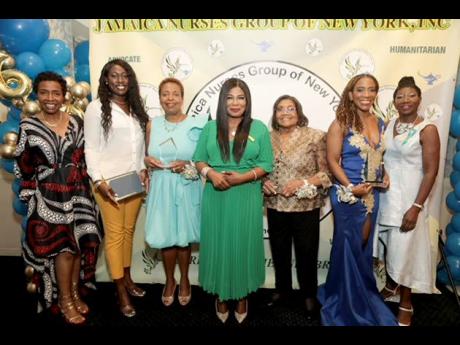 The Jamaica Nurses Group of New York (JNGNY) has been hailed for its outstanding legacy of positively impacting healthcare in New York, Jamaica, and the broader diaspora, as it celebrates 60 years as an organisation.

Jamaica’s Ambassador to the United States Audrey Marks in paying tribute to the Jamaican nurses, said “from as far back as the Crimean war, when Mary Jane Seacole established the ‘British Hotel’ behind the lines, giving help to those in need, Jamaican nurses have migrated to the UK, Canada and the United States offering their skills as health care providers”.

Having traditionally migrated for the purpose of earning a better living to take care of their children and family back home, the hard work and dedication for which Jamaican nurses have become known have often propelled them to become a mainstay of the healthcare system in the countries where they have gone, acquiring a well-earned reputation for their high quality of service delivery.

Ambassador Marks said JNGNY have done no less, as in their more than 60 years of caring, they have blazed a trail of excellence in nursing service in the state of New York, an area that boasts the highest population of Jamaicans in the United States, and for which they have commanded significant recognition.

“For that, we all as Jamaicans are especially proud, and congratulate the group for their altruistic endeavours over the years, and as the oldest Caribbean nursing organisation in the United States (they) have been tirelessly providing services in New York and in Jamaica; attaining recognition, respect and visibility,” Ambassador Marks said.

“We especially salute the presidency of Dr Claudette McFarquhar, [who] continues to implement a robust vision of improving Jamaica’s healthcare equity, access, and options, and the unwavering commitment of the JNGNY to the Diaspora’s collaborative efforts to reignite Jamaica’s greatness,” Dr Dunkley said.

The organisation’s president, Dr Claudette V. McFarquhar, paid tribute to the organisation’s founder and first president, the late Ivy Albarus. “Our founder and first president must have heard and understood the phrase – ‘You are the light of the world’; or known that Florence Nightingale was called ‘The lady with the Lamp’; or read Eleanor Roosevelt’s statement, ‘It is better to light a candle, than to curse the dark’ because as a new Jamaican immigrant to New York, when she encountered the dark challenges of assimilating into the new culture and into her nursing profession, rather than curse the dark, she lit a candle. The flamed torch of caring ignited the spirit of other like-minded nurses, and the Jamaica Overseas Professional Club of New York was formed as a means to support each other.”

She said “The group’s initial name was changed to The Jamaica Nurses Group of New York Inc; and ‘Caring at home and abroad’ evolved as its mantra.”