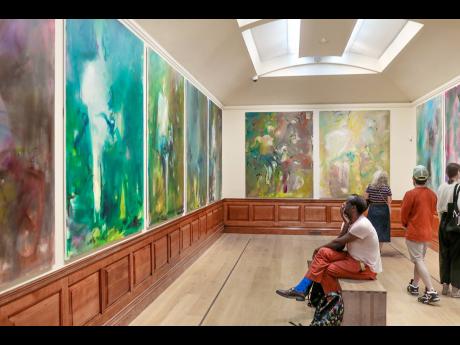 Contributed
Anthony Daley (seated) looks on at his work inside the Dulwich Picture Gallery.

A celebrated Jamaican artist is having his work hosted in England’s first purpose-built public art gallery - the Dulwich Picture Gallery.

Anthony Daley, an abstract expressionist, has painted 12 canvases depicting “new ways” of telling the story of Sir Peter Paul Rubens’ masterpiece Venus, Mars and Cupid.The first, included in the series called ‘Unlocking Paintings’, wraps around the walls of the gallery’s main suite of rooms. Daley’s works, titled ‘Sons of Rubens’, took six months to complete, and is on exhibition until March 5, 2023. Lisa Anderson, freelance curator and champion of black British art, recommended to the Dulwich Picture Gallery that Daley contribute to Unlocking Paintings.

Anderson said: ‘As a freelance curator, I suggested a number of abstract artists and Anthony was one of them. He is a phenomenal artist, but hasn’t received much exposure within the contemporary art world.

“The feedback on the exhibition from members of the public has been very positive.” Rubens’ collection, which was painted in 1635, is housed in the Dulwich Picture Gallery in South London. The Flemish artist was famed for his mastery of colour and texture through his painting. The Dulwich Picture Gallery was founded in 1811. Daley’s paintings are of a similar size to Rubens’, but he uses darker palettes of purple, midnight blue and dark green to reveal elements of the original masterpiece.Rubens’ works are displayed in a suite of rooms at the Dulwich Gallery, allowing visitors to compare the modern with the old master.

Daley recalls being exposed to Rubens’ work as a child living in Jamaica, at age nine, as he scanned books in churches he attended.

The artist said: “The invitation to exhibit at the Dulwich Picture Gallery was a great surprise. The response has been marvellous, with art lovers appreciating my work and children drawing copies of it. The feedback I received has been very positive.

“The work gives me a feeling of beauty and exuberance, in much the same way as when I view Monet’s eight gigantic murals of water lilies at the de l’ Orangerie Musee in Paris.”

Daley moved to the United Kingdom as an 11-year-old, in the 1970s. His work has been the focus of 25 solo exhibitions across the UK, USA and Europe. He currently holds collections in The Tate Collection, National Portrait Gallery, The NHS Trust, and various restaurants and social settings across London and New York.

Reminiscing on his formative years and possible inspiration for his art, the Jamaican painter said: “The luscious and beautiful area of Gubay in St Catherine and an uncle who was an artist may have provided some motivation.

“Generally, however, there was no one who provided encouragement. I believe love of art is from God.”

Unlocking Paintings has resulted in an influx of offers for Daley to exhibit in galleries across London.