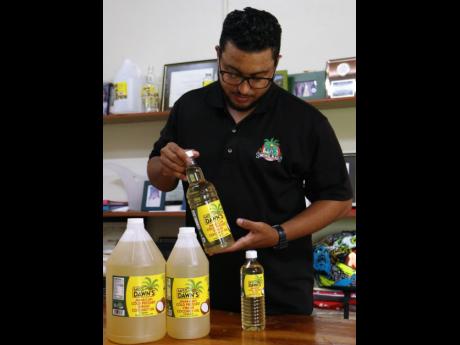 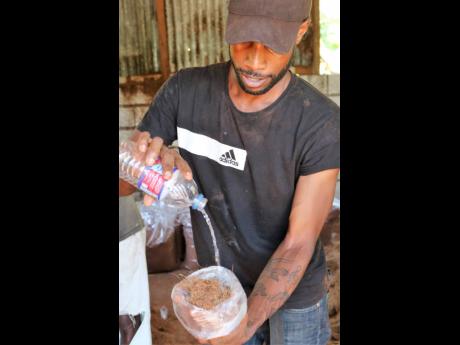 Christopher Serju
Jermaine, one of two employees fully engaged in the manufacture of coir at Michael Black Farms Limited in Nutts River, pours water onto some of the coir dust and then shows that the liquid is fully absorbed by the dust. Its vast moisture absorption and retention properties make the dust an excellent addition to potting soil. 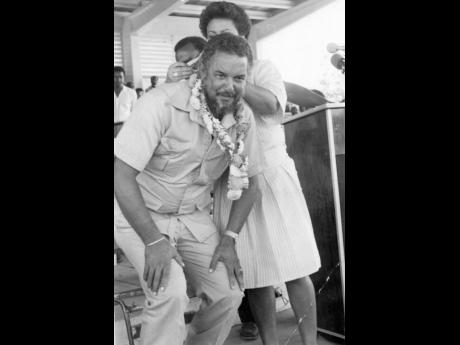 File
In this August 8, 1984 photo, Michael Black, founder of Michael Black Farms Limited in Nutts River, St Thomas, is being garlanded the new National Champion Farmer at the Denbigh Agricultural Show in Clarendon. 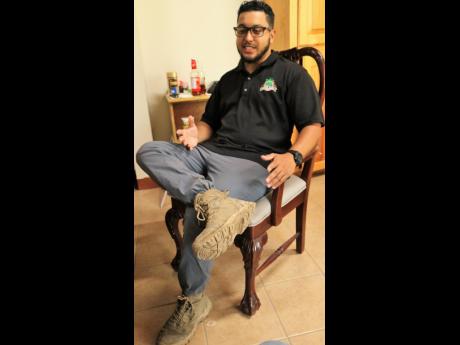 Growing up on his father’s 650-acre coconut farm in Nutts River, St Thomas, Stephen Black thought he knew everything there was to know about coconuts, having learnt from his father, Michael, who is regarded across the globe as an expert.

However, on a visit to The Philippines, Stephen realised that the successful business the Blacks had been operating was barely tapping the surface in terms of the income that can be derived from the coconut.

At the height of its operation, Michael Black Farms Limited was producing cold pressed virgin coconut oil, along with coconut water, but that trip to The Philippines fundamentally changed the dynamics of their business operations.

Stephen opted to transition into coconut oil fully, ditching the coconut water side of the business.

“I really got an appreciation for the full value of the oil, so we started to do the oil. It was very slow in the beginning, and I had to sell some of the equipment and give away some of it,” he told The Sunday Gleaner recently. “But over time, I found that the oil was much more profitable.”

The decision to forgo coconut water made good business sense, according to Black, who described it as “very technical” to work with, given that after climbing the trees and picking the jellies, they must be carefully let down to the ground, avoiding the risk of cracking, rendering the fruit spoilt when it is harvested for processing. On the other hand, for the dry coconuts to make the oil, you just use a sickle and pick them, and when they fall, they are at very little risk of damage to the kernel.

Stephen also pointed to an irony as most farmers go for the quick and consistent sale of the jellies over the dried coconut, not realising how much income they are giving up.

“A dry coconut is sold on average for over $300, but people choose to go the other way because they don’t want to wait because it takes six or seven months to get a jelly, while for a dry coconut, you have to wait 10-11 months, and so the finances may be a little problematic there,” he said.

A jelly coconut retails in the Corporate Area for anywhere between $150 and $250 and has a limited shelf life.

Since focusing on the production of the cold pressed virgin coconut oil, which is marketed under the Miss Dawn’s brand (an ode to Michael’s late wife and Stephen’s mother), Michael Black Farms Limited, having gone through the teething pains, is now not able to keep up with the demand.

Between supplying GraceKennedy, for which it produces a line, as well as distributing through the Coconut Industry Board’s shop in the Corporate Area and selling from its factory outlet at Nutts River, demand continues to outstrip supply.

Now a third generation of Blacks – Zackary and Noah, Stephen’s sons – is positioning the company to reach new markets by offering new by-products, coir dust and fibre, as well as upgrading the company’s marketing and branding campaign.

Since joining the company as operational managers just over a year ago, the young Black brothers have added the coir-production line and revved up the company’s image.

Coir is the fibrous husks of the inner shell of the coconut and is very rot-resistant, making it perfect to make several products such as rugs, ropes, brushes, upholstery stuffing, fibrous lining for hanging baskets, and doormats. The dust is used in agriculture and gardening as well as packaging, among other uses.

Coming off a bad drought in 2021 that negatively affected the business, the brothers are looking to seriously ramp up production, with Zachary sharing their vision.

“We use the dry coconut for the oil, and when my brother and I joined, we looked to find other avenues of exploiting it, and we noticed people importing the coir dust. So we are trying to fill that gap on the local market,” he said.

The conversion process from husk to dust and fibre is quite simple, he explained, adding that they invested in a ‘beater’ machine, which literally pounds the coconut husks to pieces.

“You get a mixture of dust and fibre, and then we sieve it, and the dust falls to the floor and the fibre stays on top,” Zachary explained, adding that their decision to package the coir in plastic bags instead of crocus was deliberate.

“We thought it would be good to allow the customer to see what they were getting.”

He continued: “The dust is also used as cushioning in the exports of delicate produce such as papaya, plantains, and the like. Our rates are very competitive, and we work with small sales or wholesale, with the coir offered in a 10-pound bag, and the fibre is six pounds.”

That strategy seems to have paid off as sales have been steadily trending up, with two workers, Jermaine and Desmond, employed full time in the coir facility from Monday to Friday.

Even with that, the brothers still weren’t satisfied with the growth of the company and after reviewing the Miss Dawn’s label, decided it needed an upgrade.

“My brother and I have come into the business with the aim of taking it further by way of marketing and branding,” Zachary explained.

Both had been exploring different career paths, he in marketing and Noah in medicine, when the COVID-19 pandemic intervened and they found themselves gravitating towards the family business.

“Our father and grandfather both allowed us to follow our dreams, and that just led us back to what has always put food on our table. We just did the rebranding of the coconut oil. I wanted the brand to stand out,” Zachary said.

With the reins of the company in the hands of his two sons, Stephen and his father Michael still offer guidance in the day-to-day operations and he appreciates the new areas they are exploring.

“My sons are in the coir business, trying to see what we can do with it and pushing the business to new levels, which are the exports,” Stephen shared with The Sunday Gleaner.

He admitted that experience and youth don’t always see to eye to eye but that doesn’t get in the way of the business.

“I try my best to give them leeway because that is how they are going to learn. That’s how we all learnt. They are going to make mistakes like everybody else, but we try and make it not as expensive, and sometimes they are right, too,” said Stephen.

“So I don’t try and press my style too hard. I give them a little leeway and work with them. We work together as a team and discuss everything and then we go forward from there, and if we buck in a problem, then all of us sit down and try to come up with some solutions.”