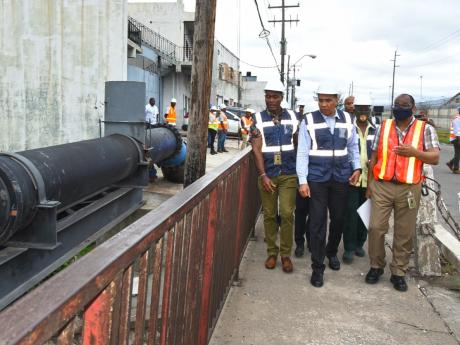 Scores of residents and businesses are to benefit from the upgrading of the National Water Commission's (NWC) Spanish Town Road distribution line in Kingston.

Twenty kilometres of pipes have been installed along one of the most heavily trafficked corridors, from Six Miles to Blake Road, near the intersection with South Camp Road.

Construction, which commenced in November 2020, was completed in July 2022.

Prime Minister Andrew Holness toured a section of the project area, in the vicinity of the Mother White Bridge on Spanish Town Road on Friday.

Describing the project as a “nation building investment”, Holness said the work undertaken should last upwards of 50 years.

“The Government decided to undertake a $2.4 billion investment… and that included putting in new mains along the Mandela Highway and a new main running all the way along Spanish Town Road. That has the capability to bring in approximately 15 million gallons of water into Kingston and St Andrew. This is a massive project with significant impact for the [beneficiary] communities,” he said.

The Spanish Town Road replacement main is expected to reduce service disruptions, eliminate non-revenue water, and improve network flexibility to mitigate the effects of drought conditions in sections of Kingston and St Andrew.

Secondary distribution lines have been installed along both sides of Spanish Town Road to minimise the need for road excavations to provide future service connections.

The project will be complemented by work being undertaken along Waltham Park Road, which will see the installation of distribution lines which are expected to provide improved service connections for 600 households in Whitfield Town.

The work commenced in August and is expected to be completed within three months.

Holness, who noted that the pipeline replacement project is consistent with the Government's infrastructure development thrust, said other improvement works will be undertaken along Spanish Town Road.

“That will then ensure that the development plans for Port Royal are taken into consideration,” he further stated.