Update | Distressed whale in Negril freed, now back at sea 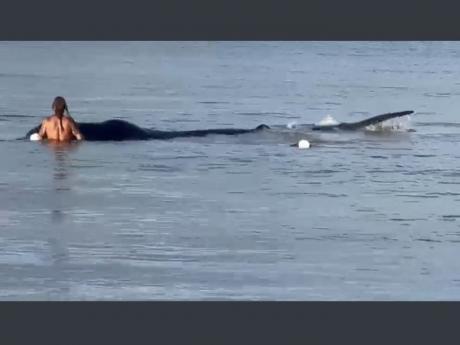 It is theorised that the whale may have been disoriented by a storm on Saturday night, resulting in the animal venturing into the shallow waters where it got trapped.

The National Environment and Planning Agency (NEPA) is reporting that a sperm whale which was beached in shallow waters in Negril, Westmoreland this morning has been freed and is now back in open water.

In a release this afternoon, NEPA said that the whale, which was spotted near the Azul Beach Resort in Negril, was directed back out to sea through channels in the local reef.

NEPA said it collaborated with several stakeholder groups to free the whale, include the Jamaica Defence Force Coast Guard, the Jamaica Society for the Prevention of Cruelty to Animals, the Negril Area Environmental Protection Trust, veterinary experts from Dolphin Cove, and local water sport operators from Stanley's Sea Sports.

The animal's plight came to attention after a video was posted on social media this morning showing an unidentified swimmer attempting to help the whale which appeared to be floundering in the water.

It is theorised that the whale may have been disoriented by a storm on Saturday night, resulting in the animal venturing into the shallow waters where it got trapped.

The release from NEPA also noted that incidents of marine mammal stranding are rare in Jamaica.

On that occasion, the affected whale was treated for injuries and subsequently released back out to sea.