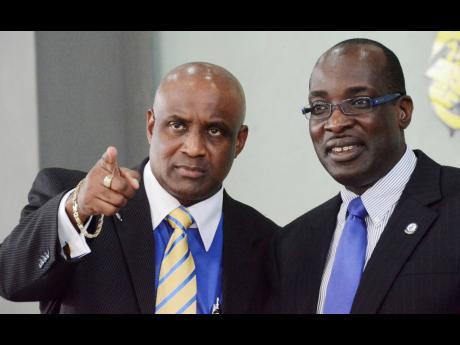 Chief Parish Court Judge Chester Crooks had ruled last February that the accused, who are implicated in a multimillion-dollar fraud case, had a case to answer. -File photo

A court ruling that former Education Minister Ruel Reid and his co-accused have a case to answer over their alleged corrupt actions, is to be reviewed by the Supreme Court on February 7 next year.

Chief Parish Judge Chester Crooks had ruled last February that the accused, who are implicated in a multimillion-dollar fraud case, had a case to answer.

The judge's ruling was in response to a preliminary objection raised by Reid and Pinnock on the basis that the charges against them should be nullified as the Financial Investigations Division (FID), which levelled the charges, had no authority in law to arrest or charge them.

Reid and Pinnock took issue with the decision after Crooks declared that he was recusing himself from the trial because of a perceived conflict of interest, and sought a judicial review.

It was later revealed that the conflict was in relation to the judge's attendance at Munro College while Reid was head boy.

In the meantime, the court was also informed today that the FID has been granted permission to appeal the decision of Supreme Court Justice Andrea Pettigrew-Collins, who had ruled that she had no authority to overturn or vary the decision of her colleague, Justice Courtney Daye who had stayed the trial.

Justice Daye stalled the trial in June 2021 after Reid and Pinnock sought leave for a judicial review of Crooks' decision.

One of the FID's main arguments is that halting the proceedings has delayed the preparatory work needed to get the case ready for trial.

The Reid, Pinnock and their co-accused were arrested by law enforcement agencies in 2019 in connection with a major fraud and corruption probe by the FID involving transactions at the CMU.

The charges include conspiracy to defraud, misconduct in a public office at common law and breaches of the Proceeds of Crime Act.