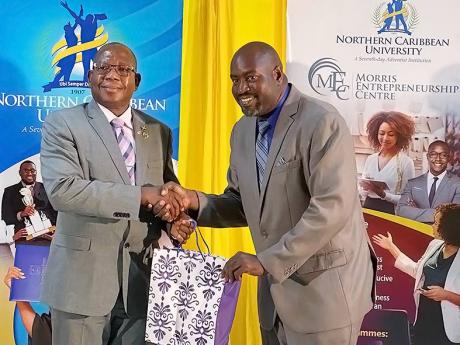 For 44-year-old Gregory Fullerton, knew that he needed a career change three years ago.

Although Fullerton knew he needed this change, the former bank teller, who served the National Commercial Bank for 14 years up until September 2019, just could not pinpoint what the change could or should be.

After leaving his job, he turned to farming with his father, who is now deceased, in Trelawny. Soon after the pandemic hit, and he just rolled with the punches and continued.

“When I left banking, we had the whole meltdown with COVID-19 and it (farming) was one of the viable things to do at the time, because of the whole restrictions and measures, so I had to work around that to ensure viability and taking care of the family,” Fullerton told The Gleaner at the Golf View Hotel in Mandeville, where he was awarded top male participant for the Small Farmers Digitalisation Programme.

“I resigned, not because of farming, but because I wanted to go into other job opportunities. [I] had a bit of challenge due to the whole COVID-19 situation,” he said.

Fullerton also said his father inspired him to get a degree as a teenager, which he did at the Northern Caribbean University (NCU) and got the job in banking. He is thankful for the push from his father.

“He is one of the persons who is very instrumental in farming, and he always told me it’s therapeutic. Not only that, but you’re able to feed your family. You’re able to take care of not only your family, but other neighbouring persons; and it’s also a viable business if everything goes well,” the man, who also pursued a bachelor’s degree in business administration up until 2004 when he graduated, told The Gleaner.

He continued, “He loved farming, but he was a business person, so I followed in his steps.”

Fullerton said his father’s words about farming have proven to be true.

Now, nearly three years later, Fullerton is elated that he chose to do farming when the pandemic hit, as he not only got a chance to spend time with his father’s, but also build a business venture for himself on his own land.

“With the war in Ukraine, we depend a lot on greens and the corn; it’s a main ingredient for a lot of products that we use,” he added.

Fullerton, who is now a member of the Southeast Cockpit Country Farmers LFMC and plants yams and cash crops, such as cabbage, carrot and pak choi, sees himself continuing to do farming in the future.

“It is wonderful. Farming has to be a part of my life. One of my main dreams is to extend my farm, ... to get it bigger ... so that we can hit the export market,” he proudly said.

He wants to enter the export market next with his products, because he knows how important it is to earn foreign currencies to help build his nation.

“Jamaica is heavily dependent on the US dollar, and so because of the global community, the markets are open and one can trade and do business in not only one’s country, but offshore,” he said.

He heard about the Small Farmers Digitalisation Programme last year.

The programme, implemented by the Morris Entrepreneurship Centre at NCU, provided the small farmers with the requisite skills needed to embrace and utilise technology to enhance their farm businesses.