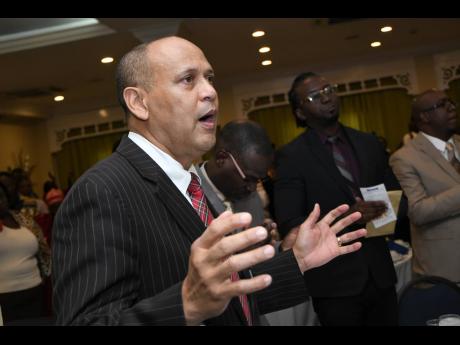 Comparing murderers here to “suicidal jihadists”, insurance executive and church deacon Eric Hosin has called for Jamaicans to abandon the penchant for self-gratification and become converts of Christianity.

Speaking at Sunday’s virtual launch of the Association of Christian Communicators and Media (ACCM), Hosin said that a thirst for righteousness was the only antidote for the country’s wave of violence and antisocial behaviour among children.

“What is happening in our society is that we need to recognise that all the things that we are trying are just not working and we realise that we have to turn to God because nothing [is] working,” Hosin said.

A deacon and board member at the Church of the Open Bible, Hosin believes children should be exposed to godly teachings from the womb. He cautioned parents to be mindful of the values they are transmitting daily as they rear their children.

He also urged Christians to not only pray, but to lead exemplary lives.

Alluding to Jamaica’s propensity for violence, he railed against the lack of regard for life and criminals who “want to make ‘duppy’”.

“We have some suicidal jihadists out here in Jamaica who are willing to just put themselves on the line to kill a police or to kill whoever else,” said Hosin, group head of life, health and pension at the Guardian Group.

Hosin thanked the security forces for their commitment to tackling crime.

Up to September 24, Jamaica had recorded 1,147 murders, 89 more than for the corresponding period in 2021. That represents an eight per cent rise. Overall serious crimes are up four per cent year-on-year.

The ACCM comprises communicators and media workers in churches and secular media who promote Christian values and standards.

The association, which is now in full operation, has reportedly built membership support in Jamaica, across the region, and in the diaspora.