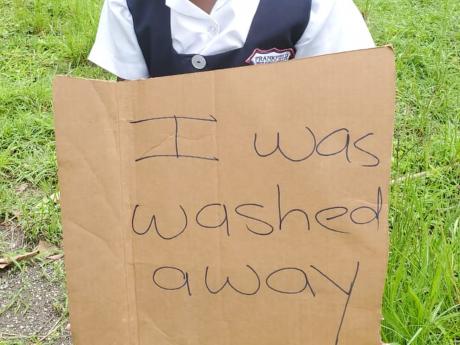 Last Thursday a woman and a child in their attempt to cross the river to get to their homes were swept away by the Rio Minho and had to be rescued. - Cecelia Campbell-Livingston photo

Last Thursday a woman and a child in their attempt to cross the river to get to their homes were swept away by the Rio Minho and had to be rescued.

Councillor for the Frankfield division, Clive Mundle, who empathised with the plight of residents, described the absence of a bridge as “a big disgrace”.

“I am saying this bridge has washed away from 2017 and it is a disgrace. I don't care which government inna power it is a disgrace, because at the end of the day...the people of Southwood, that's where they live. They don't have any choice because that's where they live. They have to get home and they have to come out to do their business and have to go back home,” he notes.

O'Brian Phipps, a resident of Southwood district, also known as Damhead, said many children and elderly people live in the community and he worries about what would happen in an emergency.

“It is very difficult. The problem is no one comes and gives us any information pertaining to what they are going to do about it and it is a shame,” he notes.

Phillip Henriques, member of parliament for Clarendon North West, where the community is located, said since taking over in late 2020 he has been “representing like crazy”.

Noting that the bridge was washed away while Richard Azan was the MP, he said immediately after taking over he started to push for a new bridge.

“I have had countless meetings with Minister [Everald] Warmington and National Works Agency about the state of the bridge.

"This year Mr Warmington came out in Parliament in his budget speech that he would be making it a priority,” he shared with The Gleaner.

He noted that the allocation of funds for the project is out of his hands.

“This is not an issue about me not representing, I have been representing like crazy,” he said.