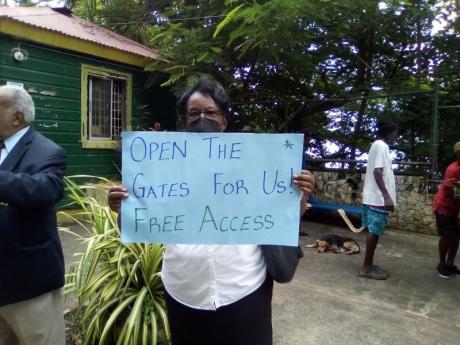 The UDC advised on September 1 access to the property will be restricted to facilitate the police investigation of the murder committed on August 31, 2022. -Carl Gilchrist photo

Several members of the church community in St Ann, supported by a group of chanting Rastafarians, are protesting outside Little Dunn's River in Ocho Rios, demanding the re-opening of the facility.

It was closed in September following a murder on near the beach on August 31.

Chairman of the Ocho Rios Ministers' Fraternal, Hudston Taylor, said the groups turned out to express their "dissatisfaction" with the treatment of the property.

"We are seeking for an amicable solution with the parties involved," he said. "As we are aware of the situation that exists, we have decided in our meetings that we will come out today and just show Jamaica that we are willing to be advocates for change and for development the people. The Church, now, has to become the voice for those who have no voice," said the pastor in the Church of God of Prophecy.

He added: "We have no problem with development. We are all for it. But it must not be done at the expense of the ordinary person who is not able to afford other facilities that are costly. We believe that this must be developed but it must also be accessible to the ordinary Jamaican."

The property, known as Belmont, is owned by the government's Urban Development Corporation (UDC).

A  response has been sought from the agency.

The UDC advised on September 1 that access to the property will be restricted to facilitate the police investigation. "Members of the public are encouraged to adhere to the instructions of the police and security officers and desist from entering the property," it said, noting that the area is not licensed as a public beach.

For years, persons have used the property not only for recreation, but also for wellness purposes such as exercise.