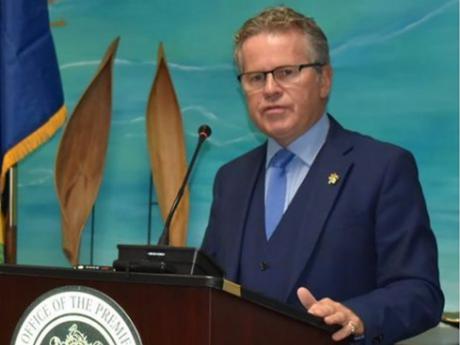 “Several days ago, there was an exchange of fire with one Jamaican, who dropped his weapon but escaped": Turks and Caicos Governor Nigel John Dakin. - Contributed Photo

“It remains ongoing and it will not stop, unless we stop it,” Dakin told the House of Assembly as he made reference to the surge in gang violence here.

Dakin said on Sunday night, following an attack in Long Bay against those who were allegedly associated with local drug dealers, and where an innocent visitor from the United States was killed, a Police Tactical Unit, on patrol and deployed with the express mission to arrest violent criminals, intercepted the assailants.

He said the police vehicle was hit by multiple strikes from high-velocity rounds.

“How an officer was not killed is remarkable. Our Tactical Unit returned fire and while it is still to be confirmed, and I may need to revise this, we believe one of the deceased, whose body was dropped in Dockyard by his fellow gang members, had been shot in the forehead as a result of our officers returning accurate fire under extraordinary pressure,” he said, giving a background to the surge in criminal activity in the country.

The governor said that several months ago two local gangs lost their leadership. He said one extremely violent local gang leader was shot dead by police, while resisting arrest.

“The other, a Haitian gang leader, who the police had made four separate attempts to arrest in the shanty areas of 'Romy Yard', was killed by one of his own gang before he could be arrested,” he said.

The Governor said that the vacuum and confusion this created allowed a predominantly Jamaican gang with a relatively small footprint in the Turks and Caicos to reinforce from Jamaica.

“They had anyway been seeking to kill one of their local rivals,” Dakin said, reminding legislators of the three days of shooting in Five Cays during April as this initial feud played out.

“Using military grade high velocity weaponry, the vast majority of the murders in September have been targeted and linked to this enlarged and now emboldened gang trying to remove who they believe are the local drug and arms smuggling competition. Those local criminals, already established here, are fighting back.”

He said while not everyone killed has been involved in criminality, many who have been murdered have been linked to criminality and a spiral of reprisal killings, including to avenge some innocent as well as criminal victims, has been the result.

“Some who know that they are being targeted have left the islands. Some of those who have been murdered were themselves murderers. Some, having executed their crime, have slipped away through fast boat. When members of the media ask how many have been prosecuted, this is the background the police are operating against,” said the governor.

Dakin said despite these challenges, there have been arrests, but current legislation only allows the police to hold for 48 hours, and with witnesses and victims not prepared to talk, even those who have been shot, the policing challenge is significant.

“For those that criticise the police, here is a reality check. Visiting senior UK police officers tell me that there is no County Force in the UK that could start to tackle an armed and violent cross-county, let alone trans-national threat, of this scale,” he said.

He said set against that fact, the Tactical Unit, supported by intelligence, have, every night and every day, been engaged in a hunt for these men.

The governor said the police's heavy presence in Five Cays resulted in the gang relocating to Dockyard and that significant policing operations in that unregulated development saw the police go through the doors of over 30 properties, where they came under fire from third parties.

“Several days ago, there was an exchange of fire with one Jamaican, who dropped his weapon but escaped. On Saturday night a high-speed police pursuit resulted in three arrests and recovered weaponry,” he said.

Dakin said that the Tactical Unit, and the response teams who support them, have done an exceptional job in keeping up the pressure when many police forces, of far larger size, would frankly have buckled.

“The peoples of these islands should be very proud of them. This is about their character, duty, training and leadership. I hope the House feels able to thank them and offer solidarity. The Police Commissioner has led during this period with distinction and personal courage, including last night.  He presently has the hardest job in the territory. The reforms he has been delivering, behind the scenes, give us capability so long lacking that outside support now arriving, can quickly dock into,” said Dakin.

Dakin said that the authorities have been focusing on bringing in immediate help to support the Commissioner and his Force.

He said firearms specialists from the UK arrived in the island on Sunday and are already at work “with our Tactical Firearms Unit and those who help respond.

“They are just a start.  More is coming, because it must. The initial ask to the first arrivals, from our own TCI police, is for them to focus on specialist tactics and training. More UK resource will follow during the coming week.”

He said following the visit of Premier Charles Washington Misick to Jamaica, the Jamaican Cabinet is meeting today “and we hope for support from them, as well”

“The trans-regional criminal links to their country makes a strengthened intelligence exchange a priority. Through steady investment and planning, much of the architecture needed to take gangs apart has already been built. This isn't good luck, but good planning. A specialist intelligence unit trained by the UK is now operational providing leads the police never had,” Dakin said.

“The Turks and Caicos cannot fight trans-national gangs without it …and we are now engaged in fighting trans-national serious organised crime,” he said, adding that an anti-gangs team of 24 detectives, funded by the UK, to an initial tune of three million British pounds (One British pound=US$1.13 cents) is being recruited.

“Its forward elements arrive shortly. It will embed in our Force – not only delivering immediate effect – but building local capability. With all of this combined, we will have all-but replicated the UK's Counter-Terrorism Policing model. Through it, gangs will be brought to justice, not just suppressed,” Dakin told legislators.

He said he has also been working with the UK Ministry of Justice to bring experienced prosecutors to the island to further reinforce the DPP's office. Rapid access to UK forensic laboratories is also being arranged.