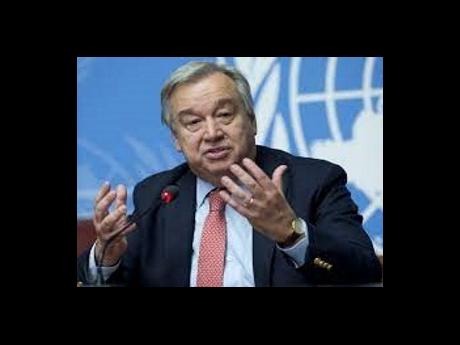 He said Gueterres is also calling “for immediate and unfettered access on the ground to facilitate the delivery of fuel for humanitarian purposes". - CMC photo

UNITED NATIONS, CMC – United Nations Secretary General, Antonio Gueterres Monday said he was “deeply concerned” about the health and safety of people in Haiti following the confirmation of two positive cases of cholera and multiple suspected cases in the capital, Port-au-Prince.

“The United Nations is ready to deploy emergency response teams to support affected communities as soon as safe access is assured and fuel supplies are unblocked,” said Stéphane Dujarric, the spokesman for the Secretary-General

He said Gueterres is also calling “for immediate and unfettered access on the ground to facilitate the delivery of fuel for humanitarian purposes.

“Fuel deliveries have been blocked at the port since mid-September, which has disrupted not only the daily life of the Haitian people, but also the ability and capacity of the United Nations and the international community to respond to a compounding crisis,” Dujarric added.

“The Secretary General appeals to all stakeholders to work together in this time of crisis, to ensure that the gains made over the past 12 years in the fight against cholera are not eroded. ”

Over the last weekend, Haiti confirmed that at least eight people have died from cholera, three weeks after the United Nations had confirmed an outbreak of the waterborne disease in the French-speaking Caribbean Community (CARICOM) country.

Haiti had not recorded a case of the disease in the last three years and the Ministry of Health said the first case was discovered in the Savane Pistache/ Decayette area of Port-au-Prince with additional suspected cases being investigated in the Brooklyn neighbourhood of Cité Soleil.

Cholera first appeared in Haiti 12 years ago this month when an outbreak was confirmed on October 20, 2010. More than 800,000 Haitians became infected and over 10,000 died from the disease.

Haitian health authorities had said that the disease was brought into the country by UN peacekeepers from Nepal and the UN refused to admit its responsibility or apologise, leaving some of its own independent rights experts to criticise its response and failure to compensate victims.