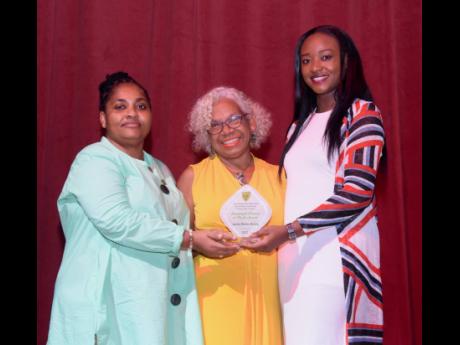 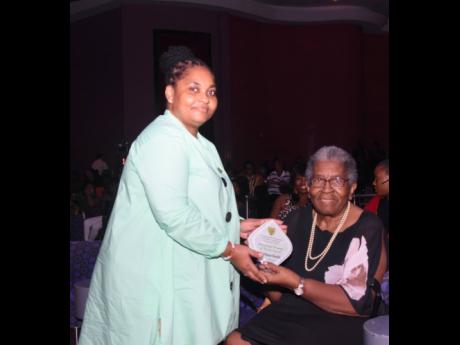 Ashley Anguin
Roberta Hunter (left), immediate past president, Montego Bay High Past Students Association, presents Barbara Smith, former principal with an award to honour her as a ‘Wonderful Woman of Worth at Iberostar Hotel on Saturday October 1. 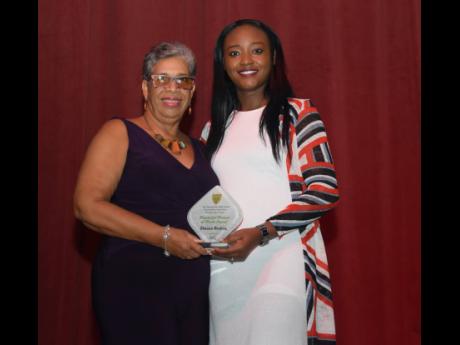 BARBARA SMITH, a past student and former principal of Montego Bay High School for Girls, headlined a list of 10 persons who were honoured as Wonderful Women of Worth for their work and generosity in the field of community service.

The women were the inaugural recipients of the award, which was created by the Montego Bay High School Past Students’ Association (PSA) and conferred on the 87th anniversary of the St James institution at Iberostar Hotel on Saturday in recognition of their contributions towards the development of their school and the lives of needy students.

In highlighting the contributions made by the awardees, Audre Flowers-Clarke, a senior member of the school’s PSA, said Smith illuminates a room with her caring smile and that she is a dependable and supportive member of the association.

“She was the first Jamaican to assume the role of principal at Montego Bay High and the first past student to hold this position at the school. She is a true disciplinarian and has held Montego Bay High students to the highest standards in her tenure; helping to shape the outstanding reputations of the school,” Flowers-Clarke said.

Bayley-Haye, a communications specialist, was honoured for service to the association while serving as public relations officer, plus her contributions financially and physically towards the development of the association and her alma mater.

Vernon was awarded especially for her unwavering commitment to her alma mater, for her valiant effort to attend the association’s activities. Even when walking became a challenge, she was still contributing and showing up for these activities.

Somerville and Chambers were posthumously awarded the Wonderful Woman of Worth award. Somerville attended the school when it was called St Helenas and was among the set of ladies when the name was changed later to Beaconsfield, prior to Montego Bay High School for Girls.

The PSA noted that Somerville and Chambers would contribute to their alma mater without thinking twice. Chambers was also remembered for her exceptional culinary skills. Together, Roberta Hunter, a member of the school’s PSA, said their passion for service and love for their alma mater formed the association’s “building blocks”.

“They continue to influence and motivate us through the legacy they left behind. The passion of these Wonderful Women of Worth is a great loss to our association,” she added.

Many more glorious tributes were showered on the group as part of what will become the annual Wonderful of Women of Worth fundraising concert.

“This year we decided to create an award for those past students of the association that have contributed significantly. We chose 10 for their years of service and their level of contribution, how much they have participated, and how much they’ve contributed in service” said Jodane Russell-Guerra, president of the MoBay High School for Girls’ PSA.

She told The Gleaner that the Wonderful Women of Worth concert aimed to raise half a million dollars to help fund the PSA’s welfare and school-improvement projects.

“We have our students’ welfare programme where we contribute to needy students. There are a number of different projects around the school, but for this year, we are waiting for the principal to present us with the school’s improvement plan so that we can choose a project for this year,” Russell-Guerra said.