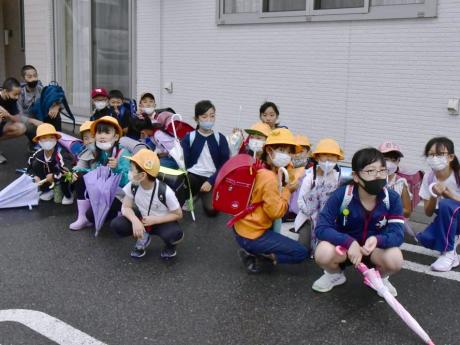 Elementary school students find shelter near a building on their way to school soon after a report of North Korea's missile launch, in Misawa, Aomori prefecture, northern Japan Tuesday. (Toonippo/Kyodo News via AP)

SEOUL, South Korea (AP) — North Korea conducted its longest-ever weapons test Tuesday, a nuclear-capable ballistic missile that flew over Japan and could reach the US Pacific territory of Guam and beyond, forcing the Japanese government to issue evacuation alerts and halt trains.

The South Korean and US militaries responded by launching fighter jets that fired weapons at a target off South Korea's west coast in a show of strength against North Korea.

The North Korean missile launch was its most provocative weapons demonstration this year, as it pushes to develop a fully fledged nuclear arsenal capable of threatening the US mainland and its allies with the goal of wresting concessions from those countries, some experts say.

The United States, Britain, France, Albania, Norway and Ireland called for an emergency meeting of the UN Security Council.

Diplomats said it is likely to be held Wednesday, but it's not certain whether it will be open or closed.

North Korea has test-fired about 40 missiles over about 20 different launch events this year as its leader, Kim Jong Un, refuses to return to nuclear diplomacy with the United States.

The United States strongly condemned North Korea's “dangerous and reckless decision” to launch what it described as a “long-range ballistic missile” over Japan.