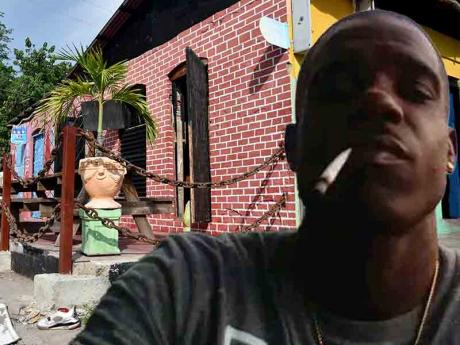 The sister said Isaacs got into an argument with a man a little after 12:00 a.m. - Kenyon Hemans photo

Residents of Port Royal are concerned that their once peaceful and quiet community is changing for the worse, after 41-year-old fisherman, Narado Isaacs, was mowed down in the town square during a fight with another man early Tuesday morning.

His sister was among those who witnessed his killing, and she told The Gleaner that the image of it keeps replaying in her mind.

"I don't know when it a go sink in," she said, as she absentmindedly played around with her food, the first meal she was having hours after the tragic incident.

“A seh look how him kill mi ... bredda. Mi glimpse somebody a do CPR but mi not even know who was trying to help. Him kill mi bredda, and is like yuh see it, but yuh just freeze,” she said. Adding that all she could do was scream.

The sister said Isaacs got into an argument with a man a little after 12:00 a.m. It escalated and another man got involved and slapped him three times. Isaacs retaliated and the man got into his vehicle and ran him over.

"Di one box him box him back him drop ova di bicycle and everybody out deh and a laugh. Him drive di car and him lick him, like him give him a notice, and den him reverse and ram and him [Isaacs] fly up and den drop, and him drive ova him, and him stuck unda di car,” his sister shared. She described the cause of the first argument as “foolishness”.

He was taken to the hospital by police officers who were on the scene.

Superintendent in charge of the St Andrew Eastern Police Division, Tomielee Chambers, said the police are still trying to locate the suspect who drove away after the act.

He has been identified as Kemar “Keke” Clarke of Fletcher's Land in Kingston.

Superintendent Chambers told The Gleaner that Clarke was previously charged for illegal possession of a firearm and was reporting to the Port Royal Police Station.

His child's mother reportedly lives in the community and he visits frequently.

“It is sad to know that at this time Port Royal would be seeing a 200 per cent increase in murder with two murders since year. Port Royal is a community where you would not be seeing any crime, persons can go around and leave their doors open,” Chambers said.

The superintendent's sentiments are echoed by David Palmer, a fisherman from the town, who blames the migration of people from other areas to the community for the increase in conflicts.

“Our culture different eno, we nuh inna di war war. But a lot of young boys over here, we don't know the reason why they are here. Sometimes it's problems where dem living and dem come lurks out. Nuff time dem come here and threaten off when dem lose dem cool,” he said.

Another resident who has lived in the town for more than 20 years agreed with Palmer. "The community is changing big time. But the devil deh everywhere, yuh have to do what yuh have to to keep yuhself safe," he said.

Butch, a resident who worked with Isaacs is still shocked about his death. “It is not right for the community, two people get into an argument and it get outta hand,” he said. But he dismissed it as an isolated incident and contended that Port Royal is still one of the safest places in Jamaica.

Chambers said the police will be working to make sure it stays that way.

"We will do everything in our power to ensure that this community remains safe through dialogue with community members. Intervention with citizens and...regular patrols,” she said.