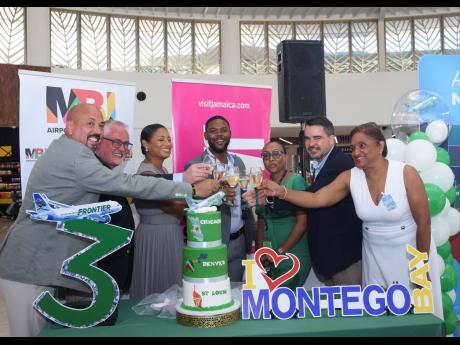 The announcement was made during a media briefing at Sangster on Tuesday where William Evans, Frontier Airlines’ senior manager for international sales and marketing, listed Denver, Chicago, and St Louis as the airline’s newest destinations from Montego Bay.

The airline has been in Montego Bay since June 2021.

“It shows our commitment to the community and to the nation. We are very excited that Montego Bay is just one of the leading destinations that we can service,” said Evans.

Aside from the three new routes, Frontier, which also flies out of Norman Manley International Airport in Kingston, operates flights from Montego Bay to Atlanta, Orlando, Tampa, Philadelphia, and Miami in the United States.

Travellers with Frontier Airlines, which Evans described as having the youngest fleet in the aviation industry, will pay US$139 for a one-way trip to one of its eight destinations, which the company will roll out with an upcoming three-day event from February 23 to 25.

“We are really excited to make this announcement, and we look forward to huge growth and development opportunities in the future,” Evans said.

“Passengers are eager to travel now, having been home because of the pandemic, and we do foresee a great influx of passengers.”

“Tourism continues to be very good for Jamaica, as we are almost at pre-pandemic levels. It is airline partners such as Frontier Airlines who have the confidence to come here and highlight Destination Jamaica abroad,” said Dyer.

“This will add to our numbers of arrivals of the year, and that is very important to us. It will keep our hotel rooms booked and put heads in beds, and we are very excited about this announcement as it augurs very well for Jamaica,” Dyer added.