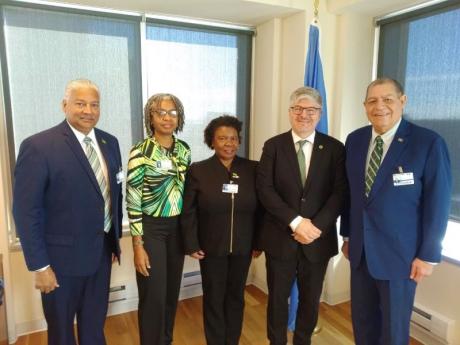 Jamaica has secured a seat on the governing council of the International Civil Aviation Organization (ICAO), following elections at the 41st assembly in Montreal, Canada.

The country will serve a three-year term.

Jamaica's election to Part III of the council is strategically important for the country, the region, other Small Island Developing States, as well as Least Developed States, across the globe, according to a statement from the Transport and Mining Ministry on the elections that took place on Tuesday. Part III ensures the geographic representation of member states.

"The election is important, given the council's preeminent role in providing direction to the work of ICAO, as the international aviation oversight body, while assuming responsibility for standards adoption and other ICAO governance responsibilities," it added.

Portfolio Minister Audley Shaw, who led the Jamaica's delegation for the first time, expressed high praises to the team in Canada, the Jamaica Civil Aviation Authority (JCAA), the Ministry of Foreign Affairs and the Ministry of Transport and Mining for this milestone achievement.

Referring to it as “a pivotal one for the nation and region”, the Shaw indicated that “Jamaica's election to the council will ensure a platform for more uniform and inclusive participation in aviation deliberations and development, across all regions.

"This will be achieved through greater and more strategic representation of our special needs and circumstances, as well as the infusion of unique, dynamic, and novel perspectives that can regenerate, further stabilize, and assist the growth of the aviation sector," the minister said.

Jamaica's delegation to the 41st Assembly also included Dr Janine Dawkins, chief technical director at the Ministry of Transport & Mining, and other personnel from the ministry and the JCAA.

The country's participation in the 41st ICAO Assembly is also presenting opportunities for Jamaica to host and engage in high-level meetings that have included the ICAO Secretary General and counterpart aviation delegations.

On Tuesday, Jamaica signed a Memorandum of Understanding with Chile, as the country continues to establish bi- and multilateral agreements and environments that increase connectivity and investment for our region and world.