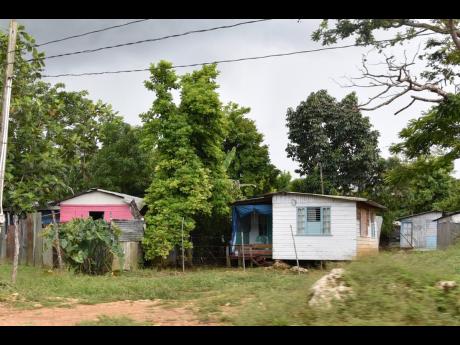 Mark Titus
One of the houses in the ‘Little Haiti’ squatter community in Negril, Westmoreland.

PLANS TO resettle squatters who are illegally occupying crown lands in Negril, Westmoreland, have attracted an influx of new squatters who have reportedly moved into the space to seize the opportunity to get a house and/or land from the Government.

The property in question, known as ‘Little Haiti’, is part of prime lands in the Whitehall section of the resort town, which was captured by the occupants in the late 1980s.

There was a plan to relocate the unauthorised settlement to other lands in Nonpareil, also in Negril, but that never materialised and the area is now home to a growing number of returning and new squatters.

The development is not sitting well with Morland Wilson, member of parliament for Westmoreland Western, who, along with several state agencies, are finalising plans to resettle approximately 30 squatters.

He said a meeting in relation to the resettlement of the citizens has been discussed with portfolio minister of housing, Prime Minister Andrew Holness, where a request for the requisite resources, including land, to facilitate the relocation was made.

“Persons heard of the announcement to resettle these citizens and suddenly more people started to move on the land. They brought old houses from somewhere and moved on to the property,” Wilson said in a Gleaner interview on Tuesday.

“They are just old derelict board buildings that they got trucks to move on to the property, because their intention is that once they have a house on the property, they will be entitled to some form of compensation or they’ll be entitled to a spot on this new development that is being proposed for resettlement. But they don’t actually live there,” the first-term MP claimed.

He also noted that some of the original squatters, who had relocated elsewhere in the parish because their economic situation had improved, are now generating income from the squatter houses by offering them for rent.

“You find that some of them are still coming back now to say that this is where they started and if there is anything giving out, they need to be a part of it,” the MP said as he explained the predicament facing the authorities dealing with the resettlement.

When contacted, Savanna-la-Mar Mayor Bertel Moore, who is also councillor for the Negril division in the Westmoreland Municipal Corporation (WMC), could neither confirm nor deny the report, but promised to investigate the matter.

However, Richard Wallace, president of the Negril Chamber of Commerce, while expressing concern about the situation, said it need not be an issue if there is proper documentation and the protocols are adhered to. He argued that it would be an injustice to those who have suffered under those trying conditions for years if they were to be sidelined by new squatters.

“It should not be hard to know who has just moved on, and try to benefit from it. It would only need vigilance on the part of the parish council to make sure that the original squatters are not taken advantage of,” Wallace told The Gleaner.

The Negril Chamber of Commerce boss said that the WMC should have a list of the names of the persons squatting at the location.

“I don’t know if people who are moving on now, how they are going to benefit if the process is followed properly,” he stated.

Last year around this time, Patrick Thelwell, managing director at the Housing Agency of Jamaica, reported that the relocation plans featured many moving parts, including the MP and the establishment of a steering committee comprising the housing agency and other stakeholders.

He also said that the housing agency had the expertise required to handle the resettlement of these squatters.