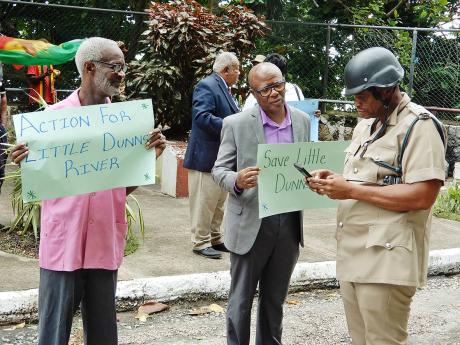 Contributed
Rev Hueston Taylor (centre) and another member of the church engage a police officer in conversation during the protest on Monday. 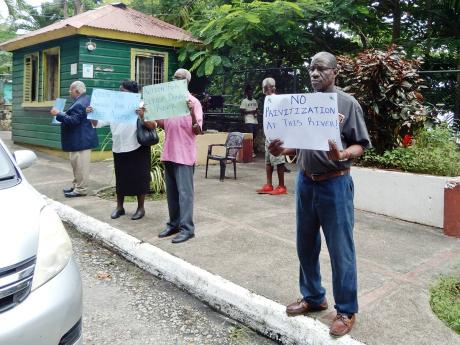 Contributed
Some of the protesters at Little Dunn’s River on Monday. 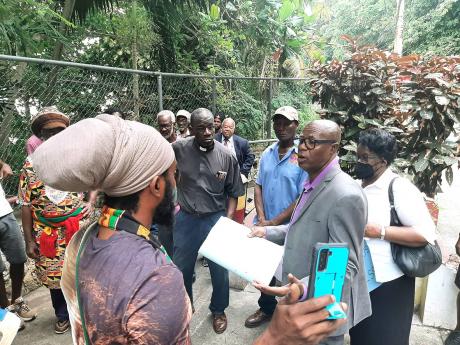 Carl Gilchrist
Rev Hueston Taylor and other members of the Ocho Rios Ministers’ Fraternal talk to Bobo, who has a shop at Little Dunn’s River.
1
2
3

A NUMBER of placard-bearing members of the Ocho Rios Ministers’ Fraternal, supported by a group of chanting, drumbeating Rastafari brethren, protested on Monday against the continued closure of Little Dunn’s River, a beach used primarily by Jamaicans who can’t afford the pricier beach facilities in and around Ocho Rios, St Ann.

Little Dunn’s River was closed in August after a murder was committed close to the facility.

Rev Hueston Taylor, chairman of the Ocho Rios Ministers’ Fraternal and pastor of the Church of God of Prophecy, said the protest was to register their dissatisfaction and concern about the way in which the situation at the beach has been handled.

“We are seeking for an amicable solution with the parties involved ... I believe that the church now has to become the voice of those who have no voice,” Taylor told The Gleaner.

The church group led a similar protest when the beach was closed in 2013, which, at the time, sparked rumours that it was being privatised.

“We are here because we consider the continued closure of this facility to the ordinary Jamaican citizen, to the public, we consider it untenable,” said Rev Johnathan Hemmings, who was head of the church group in 2013.

Continuing, the clergyman said:“We note that it was closed because a murder took place here but I don’t know of any other facility, (for example) Dolphin Cove next door, Mystic Mountain next door, I don’t know that any of them would have been closed for such a long period of time if a murder took place within their vicinity. So, to close it for that reason for this long a time, I think might be indicative of it being used as a pretext for something more sinister.”

Ricardo Reid, also called Bobo, a Rastafarian who has been operating a shop on the premises for several years, insisted that his operation is lawful and lamented that after spending tens of thousands of dollars to put in infrastructure at the facility, he has been prevented from making an income for over a month.

“We just build up the garbage receptacle [and] build a step so the elderly people can access the water. Mi have a licence and a registered business where mi have proper lighting,” Reid said.

He said he also paid the Jamaica Public Service Company $30,000 to erect a street light at the entrance.

He continued: “Mi have two licence: a licence fi food and beverage and pastries and mi have a licence for excursion, touring, mi have mi trade licence, mi register with parish council fi put up mi sign, mi have everything legit.

“Everything mi a do by the law, by the way how the system say mi fi operate. Mi a pay mi tax, every three month mi pay like $15,000 fi mi shop and mi naw mek no money now, about a month and odd now wi lock dung. And mi still a pay light bill and mi still haffi a pay mi tax.”

In responding to the protest and concerns expressed by stakeholders, the Urban Development Corporation (UDC), which owns the property, stated in a release: “Little Dunn’s River is not [to be]operated as licensed beach as the premises lacks basic sanitary conveniences, has no insurance coverage or other requisite permits in place.”