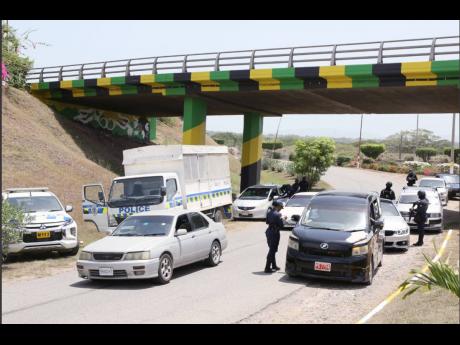 POLICE COMMISSIONER Major General Antony Anderson on Tuesday stopped short of criticising legislators over the inadequacy of the law to sufficiently punish perpetrators of traffic breaches.

Anderson, who sought to defend the actions of lawmen during confrontations with motorists in breach of the road code, revealed that the police issue just under 500,000 traffic tickets annually.

He said discussions, since the passage of new regulations, often focus on the police’s enforcement of the law, instead of the adequacy of provisions to ensure that motorists obey traffic regulations.

“The discussion quite often becomes a discussion around enforcement. The reason why the person is doing what they are doing is because we’re not enforcing. It is not true. The reason why they are doing it is because, after we have enforced - issuing the ticket - they do not pay the ticket. They may not turn up for court ... and there are no consequences that flow from doing that. The ante isn’t upped as you increase your determination not to obey the law,” Anderson lamented.

“If we do that, then the chaos will continue,” he forecast during a Jamaica Constabulary Force press briefing at the Office of the Police Commissioner in St Andrew on Tuesday.

To emphasise his concern, the police chief pointed out that a traffic offender, even after accumulating as many as 1,000 traffic tickets and being hauled before the court, may still not have their licence suspended under the current law.

Anderson said that is a loophole in the system that must be addressed.

“Without those sorts of consequences, that your licence is suspended and that you have to pay the tickets that are given to you, you will continue to see it because the same person with 1,000 tickets can walk out and drive again,” the police chief argued.

“You see them on the road and you wonder why the police aren’t doing something about it. We are doing what the laws provide for us,” he added, highlighting that local law enforcement issues twice the number of tickets as a comparable location in the United States.

He insisted that the offences continue because of the inadequacy in the structure of the legal framework.

Meanwhile, Anderson said that the police will continue to engage motorists who run afoul of traffic regulations, even in the face of criticisms.

Responding to queries on the latest video making the rounds on social media in which two lawmen are seen engaged in a scuffle with a bus driver who appeared to be resisting arrest, Anderson said that the whole story had not been captured.

He said that it is unacceptable for offenders to challenge the authority of the police and, in some instances, attempt to commit murder with their vehicles.

“The police officer or the police team that is there have to respond appropriately. We all complain and we all want streets where there is order. We want an ordered place. Well, order comes with being ordered,” said Anderson.