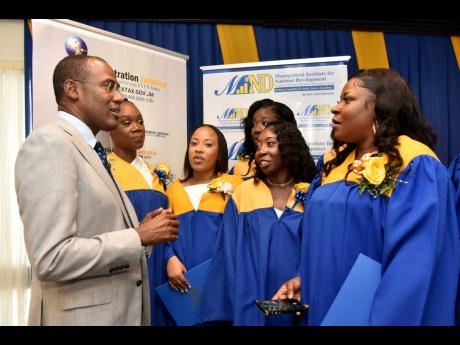 Kenyon Hemans/Photographer
Finance and the Public Service Minister Dr Nigel Clarke interacts with some of the 23 graduates of the Tax Audit and Revenue Administration postgraduate diploma programme during a ceremony held at The Jamaica Pegasus hotel on Wednesday.

The Government is to embark on what it says is the biggest build-out of tax offices across Jamaica over the next several years.

Minister of Finance Dr Nigel Clarke made the announcement on Wednesday while addressing graduates of the Tax Audit and Revenue Administration postgraduate and diploma programme at The Jamaica Pegasus hotel.

The minister said the infrastructure development will involve new construction and renovation of existing buildings.

In 2018, Cabinet gave approval for the purchase of land at a cost of $229 million on the grounds of the Nuttall Memorial Hospital for the construction of the Cross Roads tax office and other Tax Administration Jamaica (TAJ) offices.

He revealed that this new building will be first on the list, with groundbreaking expected soon.

The five- or six-storey building is expected to streamline foot traffic into the facility and improve customer service. There will also be drive-through smart facilities.

The infrastructural development, according to Clarke, is part of the Government’s thrust to provide better service and to improve efficiency.

“The experience that Jamaicans have in the tax office is one of the experiences that define Government to them,” he said.

“As a permanent institution, we want Jamaicans to have a healthy attitude and a healthy relationship with the Government as working for them. We have to improve the interaction with the tax office, and the first way of doing this is to upgrade the physical environment,” the minister said.

Though 80 per cent of taxes can be paid online, Clarke chided TAJ for not making interfacing more accessible.

“The online platform is not customer-friendly. Along with upgrading the physical layout to make them more customer-oriented and friendly, we have to be engaged in improving the online portal and make it fit for the Jamaican population that we have,” he said.