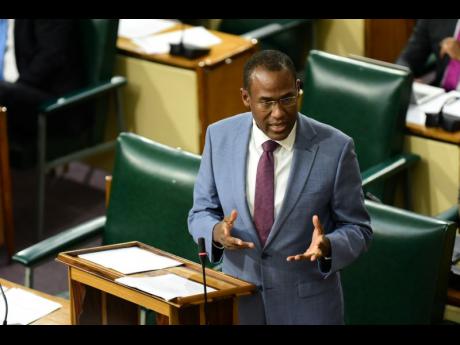 The proposed customs law is expected to improve customs practices and procedures to facilitate trade effectively and efficiently and as well as ensure increased predictability and compliance with customs requirements. -Contributed photo

Lawmakers are to debate a proposed customs law to replace legislation in place since 1941, following the House of Representatives' approval of the report and recommendations of a joint select committee on Tuesday.

The report outlines the recommended changes to the bill, following the review and deliberations of the Committee.

The Customs Act, 2020 will repeal and replace the current 1941 law and provide a modern framework that further enhances ease of doing business.

It is expected to improve customs practices and procedures to facilitate trade effectively and efficiently and as well as ensure increased predictability and compliance with customs requirements.

The JSC received comments from several stakeholders and individuals, and the report details the recommendation of the committee, which have been incorporated in a list of amendments to the bill.

Minister of Finance and the Public Service, Dr Nigel Clarke, said that the legislation will transform the country's customs landscape.

He said the modernisation of the Customs Act of 1941 is expected to bring benefits for the trading community and the Jamaica Customs Agency by improving the customs clearance and revenue collection processes, simplifying procedures for businesses, enhancing the authority's ability to protect Jamaica's borders, and providing more efficient service delivery to the public.

He pointed out that the JSC, in reviewing the Bill, recommended that the definition of goods be amended to include any form of currency.

“This seeks to clarify that the customs framework applies to the import and export of large sums of cash by various financial institutions,” he said.

He said that Tax Administration Jamaica and the Tax Policy Division of the Ministry were not opposed to the recommendation.

He said it was also proposed that clear language be inserted in Clause 169 of the Bill to impose an obligation on the Postmaster General to ensure that, before the arrival of postal articles in or departure from Jamaica, a report should be provided to the Commissioner of Customs detailing the estimated time of arrival or departure.

The report should also indicate the customs control area where the postal articles will arrive or depart, and any other information prescribed by the rules.

The required information should be provided to the commissioner within the timeframes specified by the rules.

Clarke also informed that the JSC recommended that the circumstances under which public consultation should not be allowed should be listed in the provision.

“The rules and regulations that are recommended for exemption from the public consultation requirement include those relating to rates of duty or rates of tariff, restrictions or prohibitions on the importation of goods, the internal administration of the Customs Agency, the delegation of any functions under the legislation and amendments that are minor in nature,” he pointed out.

Clarke pointed out that following the deliberations of the committee, amendments to other legislation, including the General Consumption Tax Act and the Stamp Duty Act, will be made.

Opposition legislator Anthony Hylton, who was a member of the committee, said public education on the legislation is crucial.

“This will touch every Jamaican, whether you import or export, or simply just buy products that are imported into this country… . This is a 1941 Act, and in my estimation, this has implications not only for the day-to-day economic activities but have macro implications,” he said.

The committee met 14 times to examine the 852-page bill.