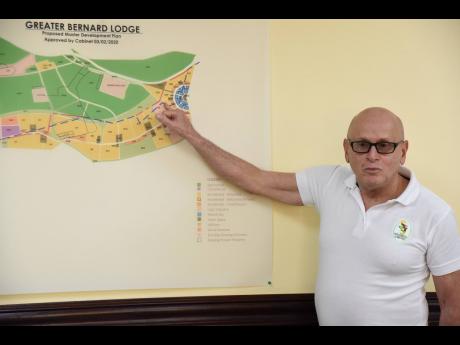 Ian Allen
Joseph Shoucair, managing director of SCJ Holdings, shows the outline of plans for development of lands at Bernard Lodge at a recent meeting. 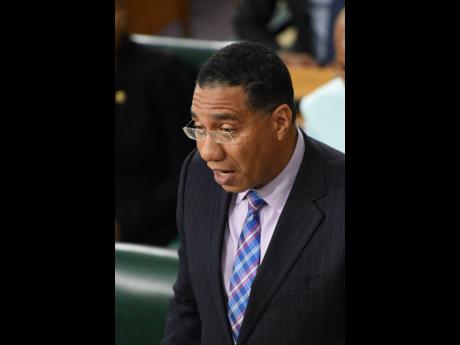 Providing an update on the progress of the plan in the House of Representatives on October 5, Holness disclosed that the SCJ Holdings has paid more than $650 million in compensation to the farmers.

“Members would be aware that to meet the requirements of the development master plan and regularise the informal and ad hoc occupation of the lands, a structured and orderly settlement plan was undertaken that included relocation, formalisation of leases and payment arrangements associated with those leases and assessment of cost associated with this exercise,” he explained.

The prime minister noted that additional infrastructure works, including expansion of storm water drains, farm road rehabilitation, among others, are ongoing.

“The cost of land clearance and preparation, farm road construction and rehabilitation, the opening and expansion of storm water drains, the provision of electricity and the construction of an irrigation system have also been borne by the SCJ, and work is ongoing,” he said.

Holness said that the farmers are supplied with irrigation water by the Rio Cobre canal system, adding that the cost for the time being is absorbed by the SCJ until the construction of a modern, pressurised irrigation system is complete.

“We have started the engineering designs already,” the prime minister said, noting that one of the two proposed reservoirs is already constructed to ensure an uninterrupted supply of irrigation water.

“These reservoirs will have a combined capacity of 10 million gallons. Already, many of the farmers are in full production, with vendors and other persons visiting the farms on a regular basis to purchase produce for retail and domestic use,” Holness added.

He pointed out that there is a well-structured agro-park that has the potential to become a model for agricultural development in the Caribbean.

“I visited it, Madam Speaker, and I am very pleased to see how former sugar lands have been transitioned into other forms of agriculture,” he told Parliament.

Holness noted that the lands, which have been underutilised for many years, were becoming a target for illegal dumping, illegal sand mining and even a haven for criminals.

The team commenced work in late January 2021, with the aim of divesting the development lands in phases. To date, two phases have been successfully completed, with a third now in progress.

The Development Bank of Jamaica monitors and gives technical support to the enterprise team to ensure that the divestment is in keeping with Government policy and governance standards.

The Greater Bernard Lodge Development Plan provides for the creation of an integrated community on 5,400 acres of lands, of which 3,027 acres are dedicated to agriculture and the remainder designated to housing, light industrial and commercial activities, social services, open and recreational space and an urban centre.

Meanwhile, the prime minister said, so far, the Cabinet has approved the sale of some 1,225 acres of land for mixed residential, commercial and light industrial purposes to seven different developers.

“Cabinet has also approved the transfer of 102 acres of land to the National Housing Trust and the Housing Agency at Jamaica at zero cost, as part of efforts to lower the cost of housing to persons of limited means. To date, gross earnings from land sales are expected to exceed $3.8 billion,” he noted.

Holness said SCJ Holdings Limited has substantial legacy obligations of more than $2 billion incurred from the divestment of Government-owned sugar estates and operating costs associated with the maintenance and security of unused properties.

He said that the net proceeds of the Bernard Lodge land sales will be allocated for clearing these obligations, and the divestment of the properties will lower SCJ’s operating cost and strengthen its financial position.

“Aside from its primary duty in managing the sugar lands, it also has an obligation to develop agriculture and other uses for land they own. Therefore, the SCJ has undertaken significant expenditure to improve agricultural infrastructure in the master plan area in payment of compensation to farmers and the cost associated with land preparation and the re-establishment of farmers,” he said.