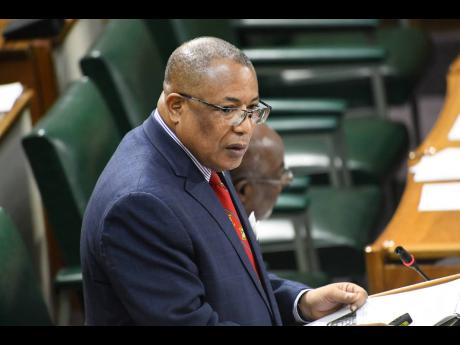 Anthony Hylton, member of parliament for St Andrew Western, wants the residents of Riverton and those who use the dump to make a living to be beneficiaries of any future plans to convert the area to a proper sanitary landfill.

In August, Prime Minister Andrew Holness announced plans to decommission the Riverton waste disposal site. However, he did not give a timeline for the closure.

Holness indicated that the government would seek greater participation from, and partnership with, the private sector in waste collection, the introduction of waste to energy conversion and the commissioning of new, properly constructed disposal facilities.

During the State of the Constituency Debate in Parliament on Tuesday, Hylton stressed that the residents of Riverton must be in line to benefit from proposed changes at the disposal facility.

“It cannot be that it was the people of Riverton that risked their lives when it was a dump, but will be sidelined when it is upgraded to a proper sanitary landfill,” Hylton said.

He told his parliamentary colleagues that many persons who worked at the dump are not only from Riverton, but communities from as far as St Catherine and St Thomas.

Hylton noted that for many Jamaicans Riverton is simply a place where their garbage is disposed of, but they would never visit the area.

According to the St Andrew Western MP, Riverton remains a deeply misunderstood community for many.

He said that the real people of Riverton are creative and resilient, noting that they were among the first in Jamaica to engage in the circular economy and sustained environmental practices of reuse, restore and recycle waste material, including the development of the scrap-metal industry.

Hylton said that the residents have educated their children and many have become doctors, lawyers, engineers, teachers and other professionals.

He said like everywhere else in Jamaica and in other jurisdictions, some of the residents are delinquent, but are also creative and ambitious.

The acts of a few have come to define the entire population of Riverton in the minds of some, he added.

“I am anxious to see the development of a modern landfill and for the waste to be properly managed for productive purposes.”

“No other group of persons anywhere in Jamaica knows waste, and the value of waste than the people Riverton.”

Hylton said that the objective now should be for the government to close the existing dump site and build a proper landfill on the remainder of the more than 100 acres of land that is already dedicated to waste disposal and management of waste and to develop a waste-to-energy industry.