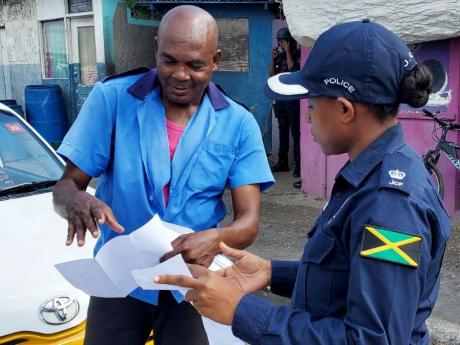 The St Andrew North police say its road management initiative, implemented a week ago to curb indiscipline on the roadways, will be ongoing.

Head of the Division, Superintendent Shericka Service, said that the disregard of the road rules by many drivers has caused traffic congestion, resulting in unnecessary delays.

“The full extent of the law is being enforced and while doing that, we are sensitising persons, making them aware of what the law is, what is required by law and how they should behave on the roadways,” she said in an interview with JIS News.

Service said that traffic congestion is a “major problem” in the division, particularly on Red Hills Road and Chancery Street, where drivers create their own lanes to get ahead of other motorists.

“We went out on the various roadways where we know there usually are traffic congestion issues, and we did some policing activities to ensure that there is no impediment to the normal flow of traffic,” she said.

She noted that the initiative also involves speaking with commuters, taxi and bus operators “to hear their concerns and how we can serve them better”.

Stressing that the initiative will be ongoing, Service said that the traffic rules must be obeyed by all motorists to ensure safety on the roadways and to prevent undue congestion.

“We are trying to ensure that our efforts are sustained. It is everyday policing,” Service said.