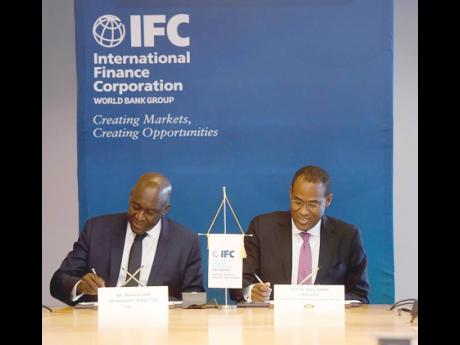 THE GOVERNMENT has engaged the International Finance Corporation (IFC), the private sector arm of the World Bank, to advise on the design and execution of a public-private partnership (PPP) road development project, estimated to be worth a whopping $124 billion (US$800 million).

Minister of Finance Dr Nigel Clarke signed a Financial Advisory Services Agreement (FASA) with the IFC Managing Director Makhtar Diop for the development of the North Coast Highway Project yesterday in Washington, DC. This is further to the MOU signed between the Government and the IFC in April for the same project.

According to Martin Spicer, IFC’s regional director for the Caribbean, Mexico, Colombia and Central America, “This project will open new paths for Jamaica’s social and economic development.”

He added: “IFC has extensive expertise in public-private partnerships for large infrastructure projects, and we are confident that this project will be an important boost for tourism and open up new areas for economic development in Jamaica.”

In explaining the premise to engage the IFC, Clarke said: “Last year, we signalled that the GOJ would leverage the improvement in Jamaica’s macroeconomy to utilise an improved modality for highway infrastructure procurement that is open, competitive and transparent. With enhanced fiscal credibility and entrenched stability, Jamaica is now in a position to put together a complex transaction of this nature with the realistic prospect of attracting large international firms to compete for this kind of opportunity. We are pleased to enter into this definitive agreement with the IFC, whereby they will advise the GOJ on the structuring and execution of this game-changing transaction.”

Under the FASA, the IFC will provide a full-service advisory that will assist the Government in all steps of project structuring and implementation to successfully complete the expansion, improvement and maintenance of the Mammee Bay to Salem (12.3km), Seacastles to Greenwood (6.8km) and Greenwood to Discovery Bay (40.7km) road segments. These services include carrying out detailed technical, legal, financial, environmental and social studies, designing the bidding process and implementing a competitive tender that results in a bankable project for investors that meets clear public-sector goals.

In addition, the IFC will provide guidance to the Government on how it may access grant funding to finance the cost of the advisory service.

The IFC has advised on several innovative and ‘first’ road PPP transactions since 2004, resulting in over 140 PPP transactions in 55 countries that generated close to US$34 billion in private financing.

The FASA signing was done during the IMF/World Bank annual meetings held in Washington, DC, where Clarke is also meeting with other multilateral partners on Jamaica’s economic programmes, as well as with international credit rating agencies and investment banks.