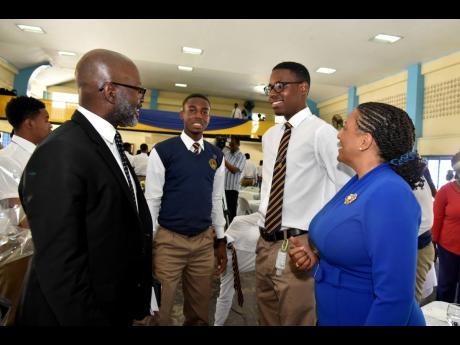 Federal Reserve Bank of New York auditor Clive Blackwood has urged sixth-formers at the Ardenne High School to strive to make the most of opportunities in Jamaica as they grow into adulthood and look to contribute to the country’s development rather than set their sights on going overseas.

Blackwood, an alumnus, was the lecturer at the St Andrew-based high school’s Distinguished Sixth-Form Lecture on Wednesday.

The ninth annual lecture was held in conjunction with the school’s 95th anniversary celebrations and is geared at preparing students for the working world and exposing them to global issues.

A number of Ardenne High alumni, who have distinguished themselves in their respective fields, were also guests at the event.

Blackwood told students that much of his success is based on “who I am on the inside” as he emphasised the importance of hard work and integrity.

The accomplished auditor, who grew up in the Waltham Park Road area in Kingston, migrated to the United States 34 years ago.

But declaring that speaking to students at his alma mater was the “greatest honour of his life”, Blackwood said he was not opposed to contributing further to Jamaica.

“This is one of the reasons why I availed myself of this opportunity to come and do this. I feel like I need to contribute as much as I can, whether or not I’m here or somewhere else. I feel that I’m in a position now where I can contribute,” he told The Gleaner.

“I wish that all schools across Jamaica would have an event like this,” she said.

Sixth-form student Shakeira Anderson said that the event was meaningful.

“The lecture was informative and it was fun. It was also encouraging and motivational,” she said, noting that Blackwood’s words could be applied to various aspects of her life in the years ahead.