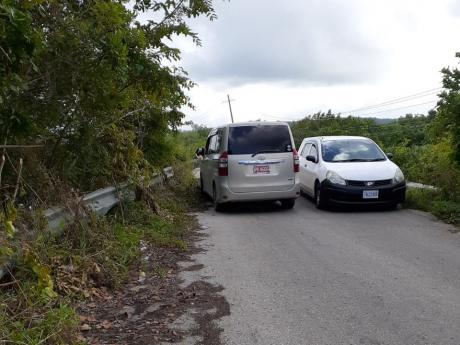 The bridge, which suffered structural damage, was closed in 2019 due to safety concerns. - Leon Jackson photo.

There is concern that disaster may strike in Falmouth, Trelawny as motorists have been using the Rock Bridge, which was closed a few years ago the structure became compromised.

The bridge, which suffered structural damage, was closed in 2019 due to safety concerns.

The bridge links Falmouth to districts east of the town.

Mounds of dirt and rocks were placed at the entrances to the bridge to block off access.

However, the items have been moved and motorists have been traversing the bridge.

When contacted, National Works Agency (NWA) Community Relations Officer for the Western Region Janelle Ricketts said she was not aware of the situation and that she would make checks.

She subsequently informed that efforts will be made tomorrow to close the bridge.

And Superintendent Winston Milton of the Trelawny Police said he too was also in the dark that persons had reopened access to the structure.

"I was over the pier today and noticed cars, motorcycles, and taxis going up and down. The NWA needs to permanently block it before disaster strikes," Milton said.

Efforts to reach Mayor of Falmouth C. Junior Gager were unsuccessful as calls to his cell phone went unanswered.