Authorities to get tougher on lawless drivers 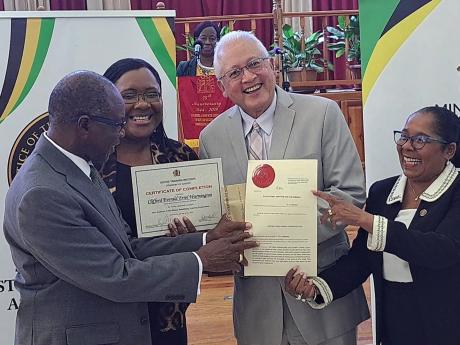 Chuck urged the 62 new justices of the peace, including St Catherine South Western Member of Parliament Everald Warmington and two councillors from the St Catherine Municipal Corporation, to see their role beyond just signing documents and giving advice and information.

As the Government hardens its stance on public transport operators who have hundreds of unpaid tickets, Justice Minister Delroy Chuck is warning that there will be zero tolerance for lawless drivers.

"People just feel that they can get on the road and do as they like but the days of reckoning are coming, for those who believe that they can drive ruption on the roads, your days are numbered," Chuck cautioned, while addressing 62 new justices of the peace at a commissioning ceremony, held at the Portmore Holiness Christian Church on Wednesday.

"Unless we have zero tolerance to the chaos and we see it on the road, before we know it we will be pushed off the road and all over the place, we as a government intend that our roads should become safe places," Chuck said.

He said the Government is working diligently towards this and those who are asking for a "bly" and amnesty will not get it.

"What we find nowadays is that wrongdoers always come asking for a bly always asking amnesty, but when you commit infractions on the road and the police give you ticket you must pay up," he stated.

He warned that thousands of persons will be removed from the roads because there will be no amnesty.

The justice minister disclosed that 70 per cent of matters in the courts are traffic related.

Chuck urged the 62 new justices of the peace, including St Catherine South Western Member of Parliament Everald Warmington and two councillors from the St Catherine Municipal Corporation, to see their role beyond just signing documents, giving advice, information, and guidance.

He said they should instead see themselves as leaders who will participate and assist in the governance of Jamaica.

Custos of St Catherine Icylin Golding presented the commissions to the Justices of the peace.

She urged them to be blameless in the execution of their duties.