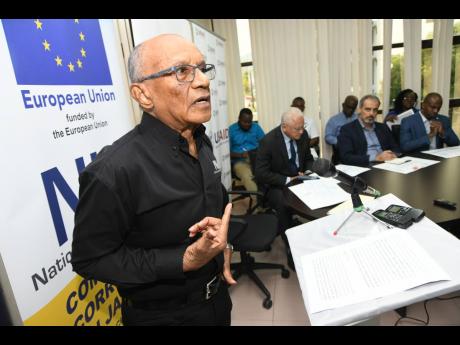 Renewed calls have been made to repeal the Official Secrets Act as an important avenue to facilitate more successful operations under the Protected Disclosures Act, 2011.

Principal director of the National Integrity Action (NIA), Professor Trevor Munroe, said the Official Secrets Act has been used by unscrupulous officials in the public sector to intimidate public servants who may wish to report inappropriate conduct in ministries, departments, and agencies.

In his submission to the joint select committee on the Protected Disclosures Act, 2011, on Tuesday, Munroe cited a Gleaner story titled ‘Spending festival – Audit flags millions in overpayments, questionable hirings, expenditure at JCDC’, which was published on November 29, 2020.

A follow-up Gleaner report on December 6, 2020, revealed that Jamaica Cultural Development Commission employees alleged intimidation from senior officials and board members in the wake of the story on a leaked audit suggesting bad governance at the entity.

“The most minimal probe would uncover more examples in which the Official Secrets Act is used to defeat the central objective of the Protected Disclosures Act and hence constitutes a major obstacle to Jamaica’s ability to elicit employee participation in the combat of corruption,” Munroe argued.

He proposed that the “offensive and archaic legislation” be replaced with an act that includes penalties for the release of information that would put the State at risk.

The recommendation was previously made by the joint select committee appointed to review the Access to Information Act in April 2011.

Munroe’s recommendation was supported by a number of committee members, including St Andrew South East Member of Parliament Julian Robinson, who said the act remains a hindrance to good governance in Jamaica.

“You highlighted one case, and I know that there are many others where you may not have written evidence but where it is always put forward as a reason why government employees should not provide information on corruption,” he said.

Opposition Senator Lambert Brown lamented that the legislation has been in existence before the two World Wars and that the last amendment was made in 1939.

“I really share the view that the Official Secrets Act needs to go … . The Queen reigned for 70 years and she’s gone. Let’s bury this one, which was before Her Majesty,” he remarked.