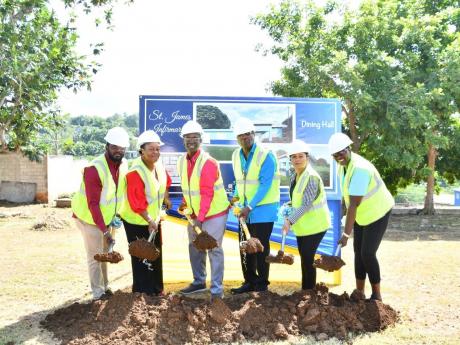 Minister of Local Government and Rural Development, Desmond McKenzie (third left), breaks ground for the construction of a kitchen and dining hall at the St James Infirmary in Montego Bay, St James, on Wednesday, November 23. He is joined by (from left) Deputy Superintendent of Roads and Works at the St James Municipal Corporation, Saad Campbell; Matron at the St James Infirmary, Jacqueline Wilson; Mayor of Montego Bay, Councillor Leeroy Williams; Secretary, Board of Supervision, Treka Lewis, and Inspector of Poor for St James, Pauline Lecky. - Contributed photo.

A kitchen and dining hall will be constructed at the St James Infirmary in Albion, Montego Bay.

Minister of Local Government and Rural Development, Desmond McKenzie, broke ground for the construction at a ceremony on the grounds of the infirmary on Wednesday.

The facility will be constructed at a cost of approximately $23 million, to be funded by the Ministry.

McKenzie said the dining area will provide a more comfortable environment for residents to eat their meals, while the kitchen will improve the working conditions of staff.

“They will have a new kitchen with state-of-the-art equipment and a dining area that is conducive for the residents to feel like somebody,” he said.

Meanwhile, McKenzie officially opened an aesthetically pleasing therapeutic park at the infirmary, which will facilitate recreational activities for residents that cater to their physical, psychological and social well-being.

The park, which boasts recreational spaces, a mural and water fountains, was completed at a cost of $5 million.

“This therapeutic park that we have introduced into the new concept of our infirmaries is to provide some level of tranquillity. [We will] get them [residents] out of the ward, put them in a nice little area, [where] they can hear the bubbling of the fountains, they can sit in comfort and relax their minds, because a lot of these people don't need anything other than something that is uplifting that will stimulate their minds,” McKenzie said.

Therapeutic parks have also been completed in St Elizabeth, Trelawny and St Mary, while parks are being built at the St Catherine and Hanover infirmaries.

The local government minister used the occasion to reaffirm the Government's commitment to enhancing social protection for the most vulnerable and transforming the island's infirmaries into comfortable and well-equipped facilities.

For his part, Mayor of Montego Bay and Chairman of the St James Municipal Corporation, Councillor Leeroy Williams, described the projects as purposeful, noting that the improvement to the infirmary will bring added comfort to residents.

“I am proud to be part of a mechanism that seeks to empower our vulnerable citizens,” he said.