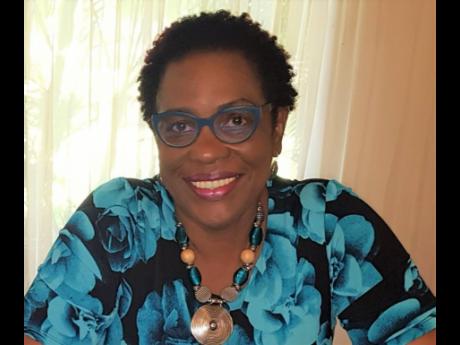 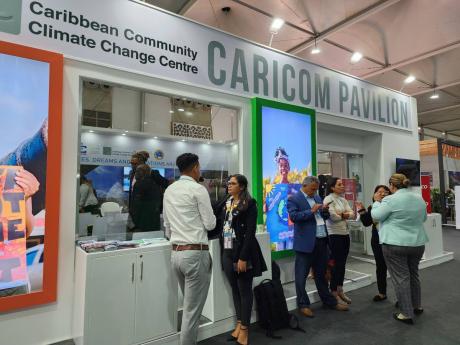 Contributed
Participants at the UN Climate Talks mill around at the CARICOM Pavilion. 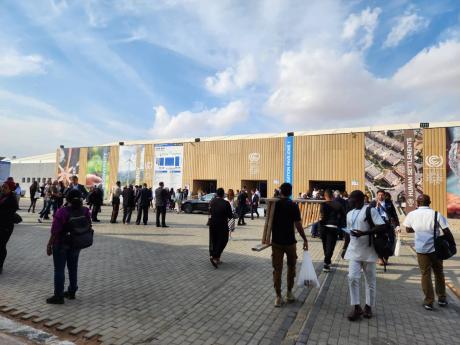 “We have literally exhausted all of our efforts … to bring home the climate action commitments our vulnerable people desperately need,” said Molwyn Joseph of Antigua and Barbuda, chair of the Alliance of Small Island Developing States (AOSIS), in a statement issued Sunday (November 20).

“Our ministers and negotiators have endured sleepless nights and endless days in an intense series of negotiations, determined to secure the establishment of a loss and damage response fund, keep 1.5 alive, and advance ambition on critical mitigation and adaptation plans,” he added.

AOSIS has represented the interests of some 39 SIDS and low-lying coastal developing states for more than two decades in climate negotiations and sustainable development processes.

Labelled a breakthrough decision, the agreement to establish a loss and damage fund forms a part of a package of decisions from the international negotiations. It follows years of deliberations on the call for financial support to help developing countries respond post climate-related impacts, including livelihoods loss; and the addition of loss and damage to the COP agenda for the first time.

However, even as stakeholders celebrate, they are mindful of the work ahead to operationalise the fund.

Executive Director (ED) of the Caribbean Community Climate Change Centre, Dr Colin Young, said while the hard-fought-for loss and damage decision was certainly welcomed, it is now time to ensure the fund becomes operational and benefits SIDS and other developing countries.

“The details will need to be worked out; the criteria established and the sources identified. The design of the fund must be fit for purpose and not repeat the mistakes of other funds that are very difficult to access and take years,” said the ED, who was present at the negotiations in Egypt from November 6 to 18.

UnaMay Gordon, former principal director for the Climate Change Division of Jamaica and who has herself been on the front lines at many global climate negotiations, agreed.

“This was a great step forward, but it is the first step. Eyes will now focus on construction of the transitional committee and the beginning of their deliberations. I do hope the fight for loss and damage gets easier from here on,” she noted, fresh from her participation in the Egypt COP.

“It should not be so hard to agree on something everybody agrees needed to be addressed. But as I said earlier, good sense must prevail,” added Gordon.

AOSIS, meanwhile, has long championed financial support for loss and damage in the developing world and only last month published a briefing document detailing how a ‘fit-for-purpose multilateral fund designated as an operating entity of the UNFCCC Financial Mechanism’ should work.

AOSIS’ membership, which includes Caribbean SIDS, have called for the design and operationalisation of the fund to include important concepts such as “climate justice” when taking action to address climate change as outlined in the Paris Agreement; and flagged the need for an operating entity that is built to provide predictable support for ex-post response to loss and damage.

Beyond that, AOSIS has maintained that the programming of support should take a “country-owned, country-driven, gender-responsive approach” and “with operational modalities that realise enhanced direct access, especially through existing regional and national entities”.